Cringeworthy yearbook pics? You’re stuck with those. But bad master suite? THAT, we can fix.

SADLY, NOT EVERY STYLE MISSTEP FROM THE LATE 80S / EARLY 90S
GETS THE CHANCE FOR A DO-OVER.
BUT ON A HAPPIER NOTE, THIS WHEATON MASTER SUITE DID. 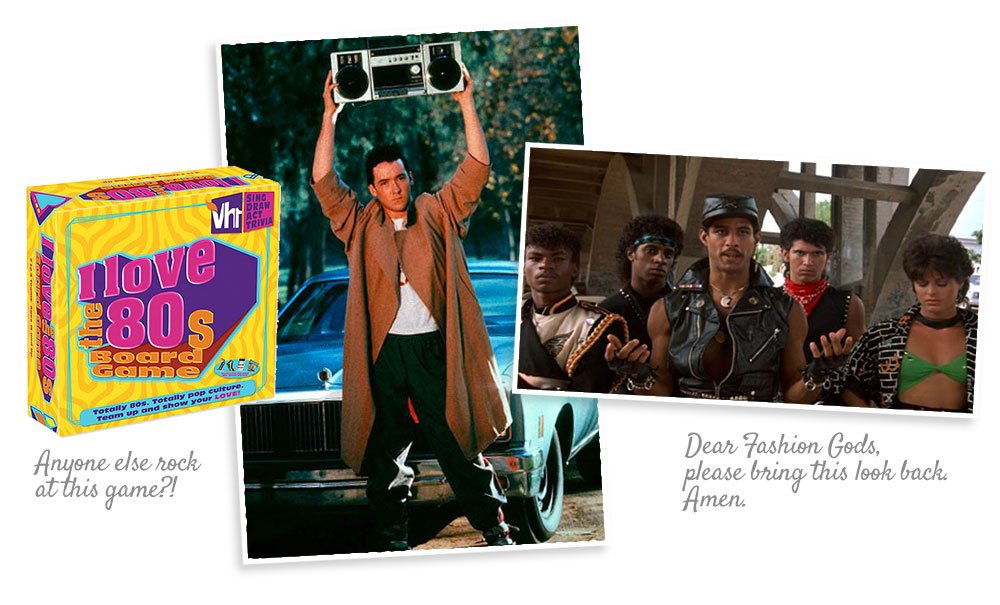 There are things that make you miss the late 80s / early 90s – like certain breakdance moves or that iconic shot of John Cusack, boom box held high. Thennn there are things that make you grateful the arbiters of taste have come to their senses and style preferences have evolved to a better place. Green faux marble falls into that second camp. Hard to believe green faux marble was ever a thing, but these master bath walls were proof that at some point someone thought it was a great idea and went for it. Thankfully, walls are an easy enough cosmetic fix. The layout, however, needed some thinking before we started in on the doing. 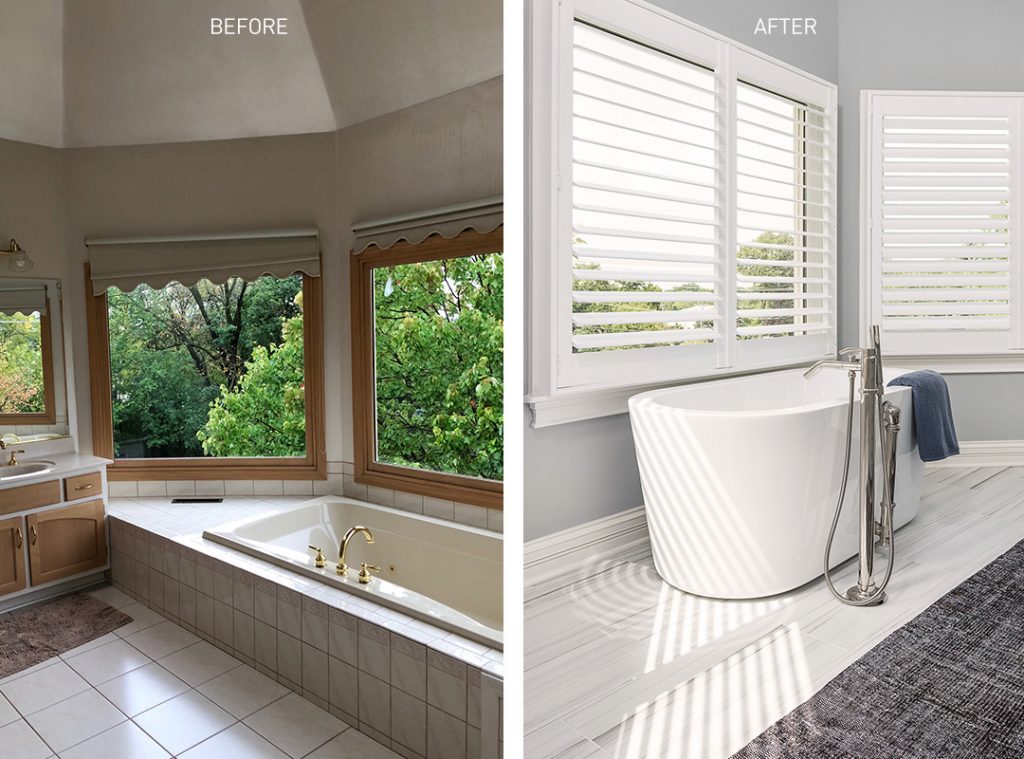 The homeowners had a few functional requests for their master suite remodel, like adding a freestanding soaking tub and expanding the closet. But in terms of style and finishes, they simply asked that it be Designstormified. They were pennant-waving fans of the work we’d done for several of their friends, so the trust factor was already there. We felt timeless was the way to go, with a few kinda showy, hey-check-me-out-I’m-awesome elements. Understated is a great look, but we like to keep it on its toes. 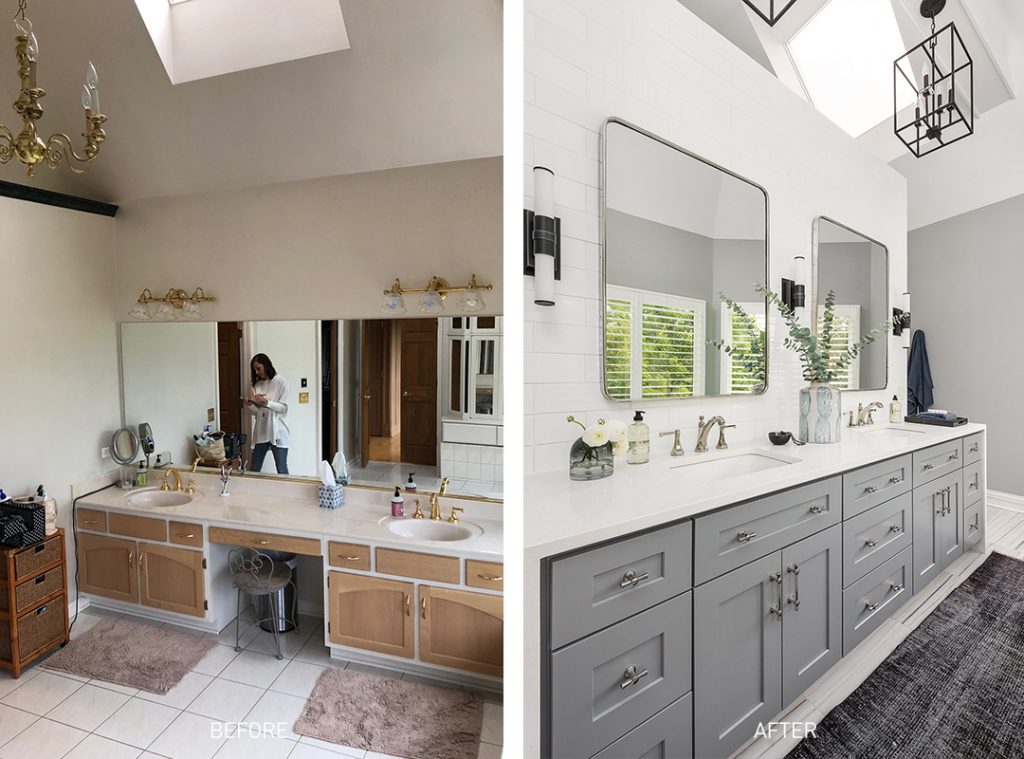 The bathroom itself was monstrous, but the shower and vanity were pushed to the perimeter, leaving a befuddling, wide-open bunch of nothingness in the middle. A huge amount of unused space. You could do cartwheels or host a dance party in there (both excellent options). Or you could rework the floor plan – an even excellent-er idea. 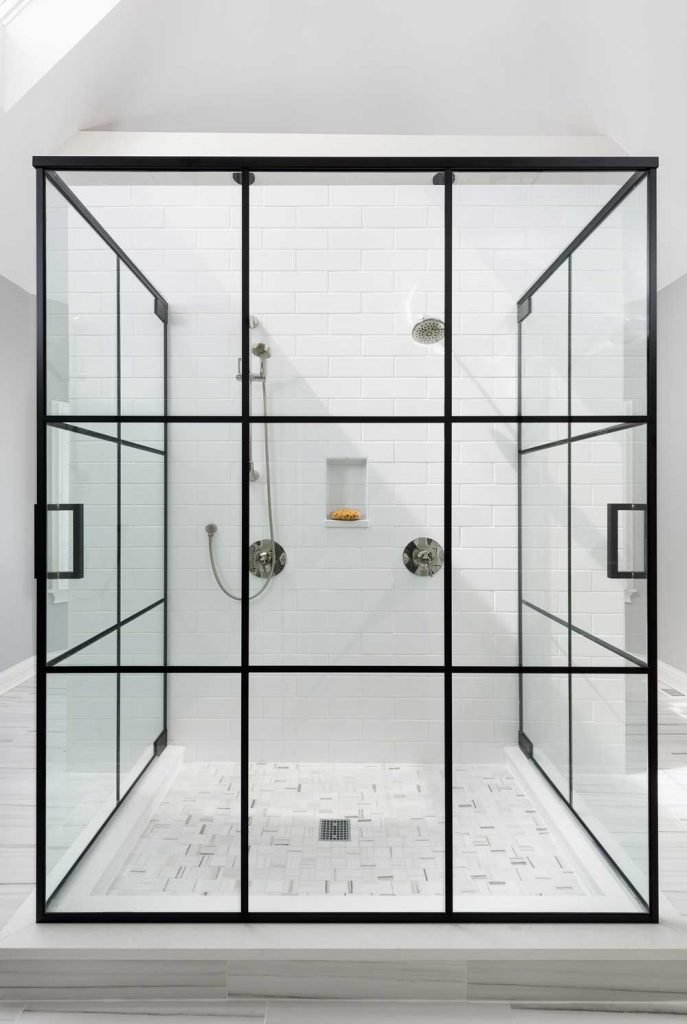 There was a small standard-type shower tucked in the corner – which just didn’t feel very master bath-y. So we designed a large two-person shower with dual shower heads and a dark steel grid on the glass walls to make it more of a focal. And we placed it, along with the vanity, smack dab in the middle of the room. We won’t go into too much structural nerd-speak, but the joist situation worked in our favor and we were able to move the plumbing without going into the ceilings on the first floor (wipe o’the brow). And by moving the shower, we freed up space to add a compact laundry room accessible from the hallway. (So compact, in fact, the washer/dryer fit came down to fractions of an inch.) 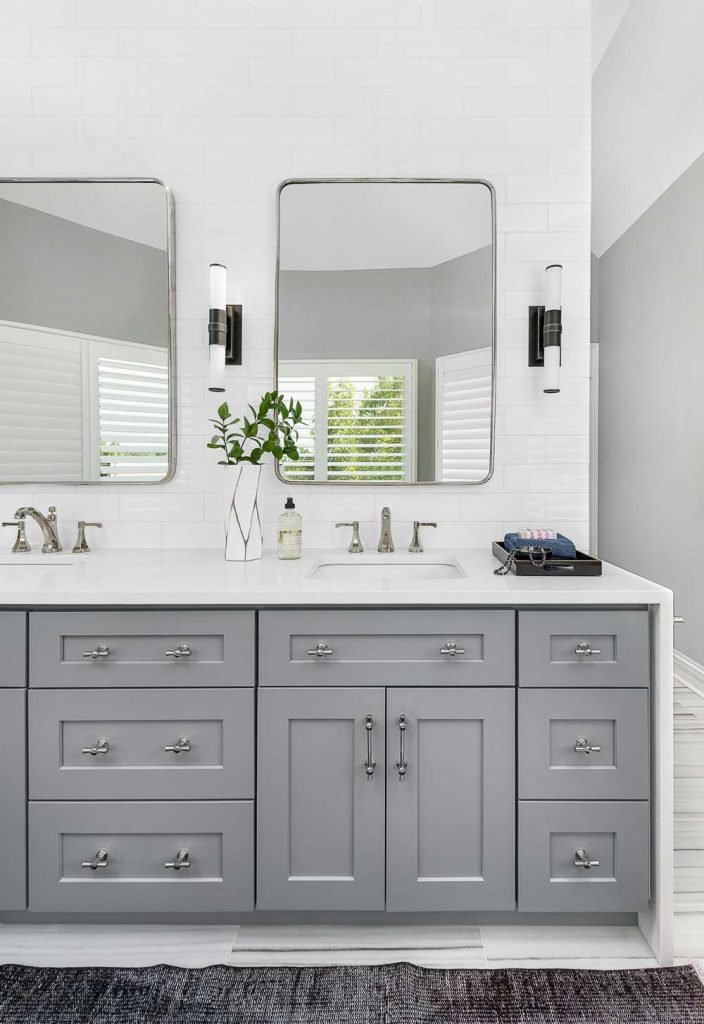 All that moving-around of walls and plumbing put a bit of a dent in the budget, so we replaced the handmade shower tile we’d initially selected with a classic white subway. We also scaled back on the vanity, moving to an in-stock option and adding a waterfall edge to give it a more custom look. One luxe touch we didn’t cut, however, was the underfloor heat. That was non-negotiable. We wanted to keep the room feeling cozy since the ceilings are so high and the space so open.

Because of the angle of the ceiling and placement of the skylights, recessed lighting was out of the question. Instead, we went the “add painted beams” route. We ran electric through them so we could drop oil-rubbed bronze pendant lights from the beams to bring down the scale of the room and make it more inviting. As you may already know, we like us some mixed metals, and this was no exception. We went for polished nickel on the faucets and mirrors, a nice counterpoint to the darker toned steel shower grid and bronze lighting, which we carried into the bedroom as well. 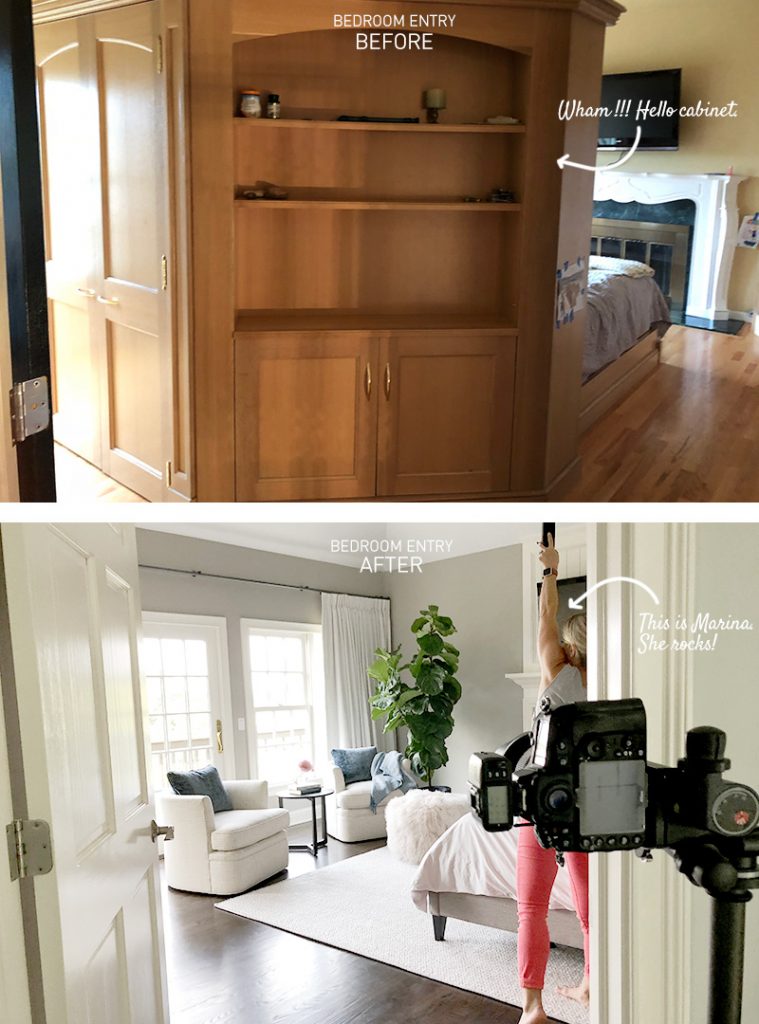 Speaking of the bedroom…wow. Sommmmmebody liked oak. Alllllot. Enough to clad not just the floors, but the bed, dressers, trim and ceiling-height built-ins lining all the walls. As with the bathroom, space was not the issue. There was plenty – it was just strangely laid out. Someone had made some pret-ty interesting choices on what goes where. We picture that exchange going something like, [idea:] “Hey, I got it, I got it. Let’s put the bed in the middle of the room. Behind big cabinets. Like right inside the doorway.” [response:] “Word.” Then a Fresh Prince high-five. 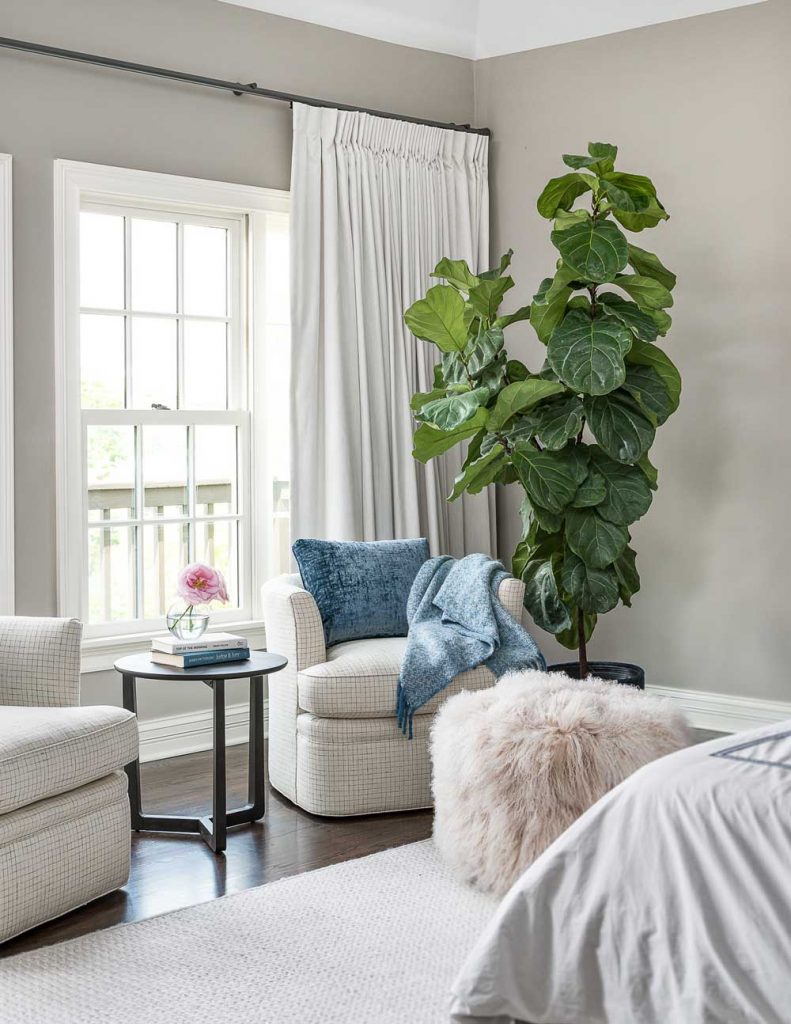 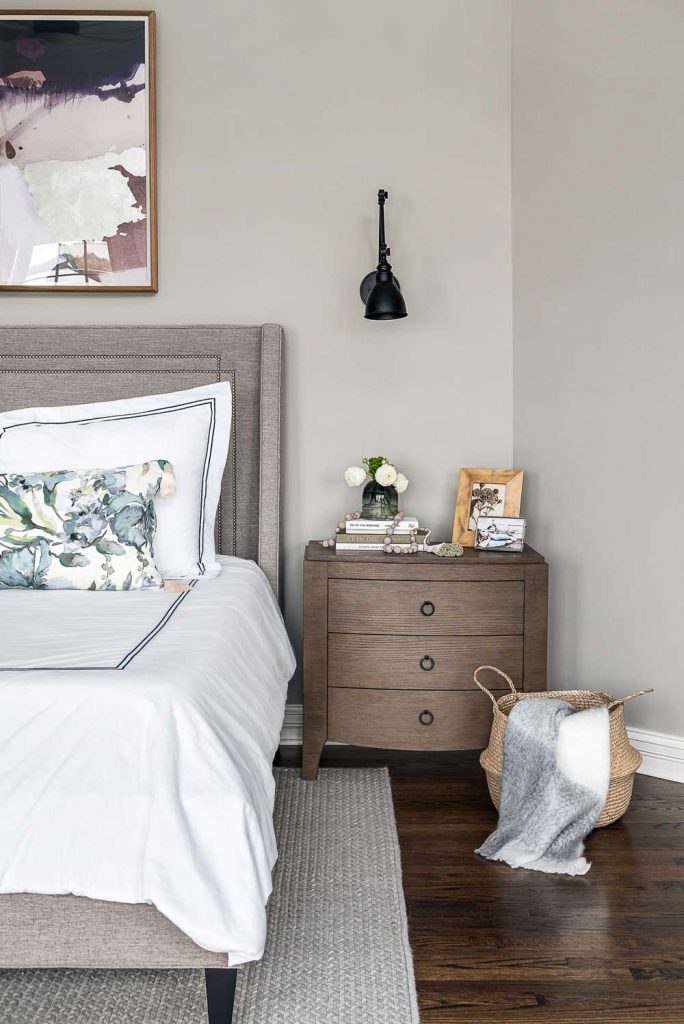 Fast forward 30ish years later, and the task at hand was an exercise in reconfiguring. And de-oakifying. We started by moving one wall in a few feet to expand the closet on the other side. Then we removed all the cabinetry, opened up the space by moving the bed to where it should have been in the first place, and installed new hardwood floors. We re-clad the fireplace surround with marble tile and new woodwork, replaced the dated roller shades with custom blackout drapery across the whole length of the window wall, then declared the project complete and ready for final pillow-fluffing. 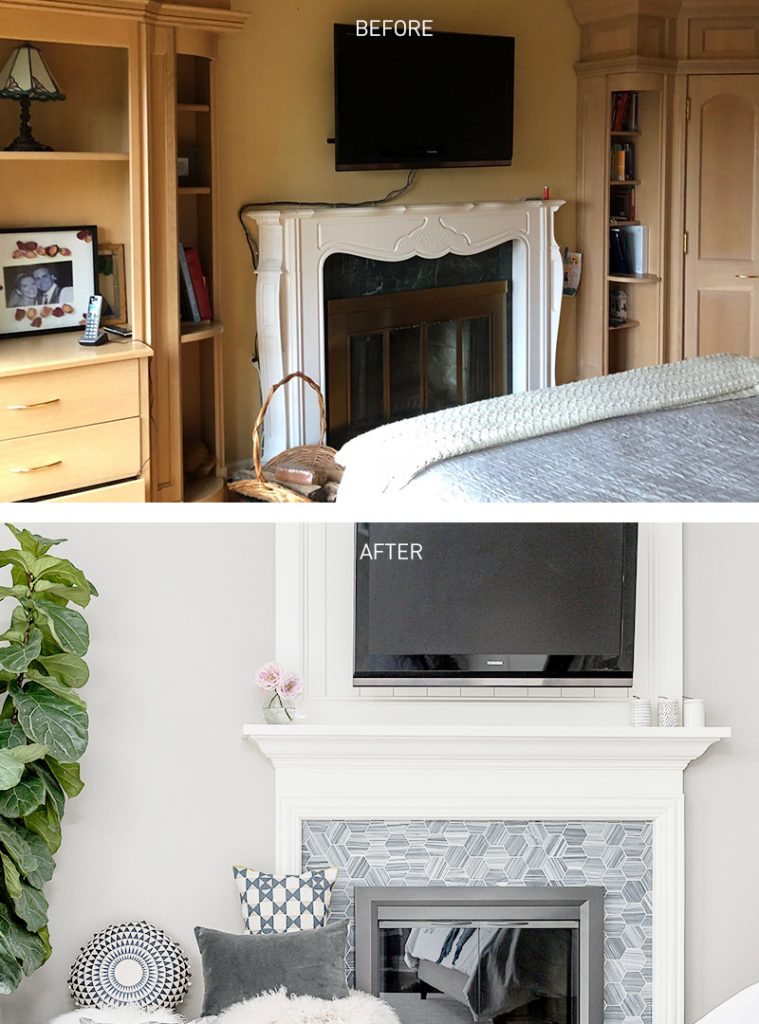 Unverified rumors from friends and neighbors indicate the homeowners sleep late daily, and their get-ready time has quadrupled. Understandable. When your master suite looks that good, you want to enjoy it – sounds like they are.

See more from Designstorms here. Or shop Storm Inspired, our Amy Storm-curated online/retail store that’s open to anyone! Our Fall Collection has lots of great new things to inspire your space.

All photos by Picture Perfect House (Thanks Marina!)