A basement so party-perfect, we hereby declare them mandatory.

THIS POSH LOWER LEVEL REMODEL IS SO RIDICULOUSLY GOOD LOOKING IT PRACTICALLY NEEDS AN AGENT. (IF IT HAD LEGS, IT’D FO SHO CHALLENGE ANY RIVALS TO A WALK-OFF.)

Intimate European-inspired wine room with gold-flecked cork walls? But of course. Clubby, channel-backed banquette and a hanging swing chair? Also of course. That said, it’s not all fancy-pantsy-ness. It likes a good time, so there’s ping pong. Throwback video games. Annnnnd Foosball. Here’s how we got there… 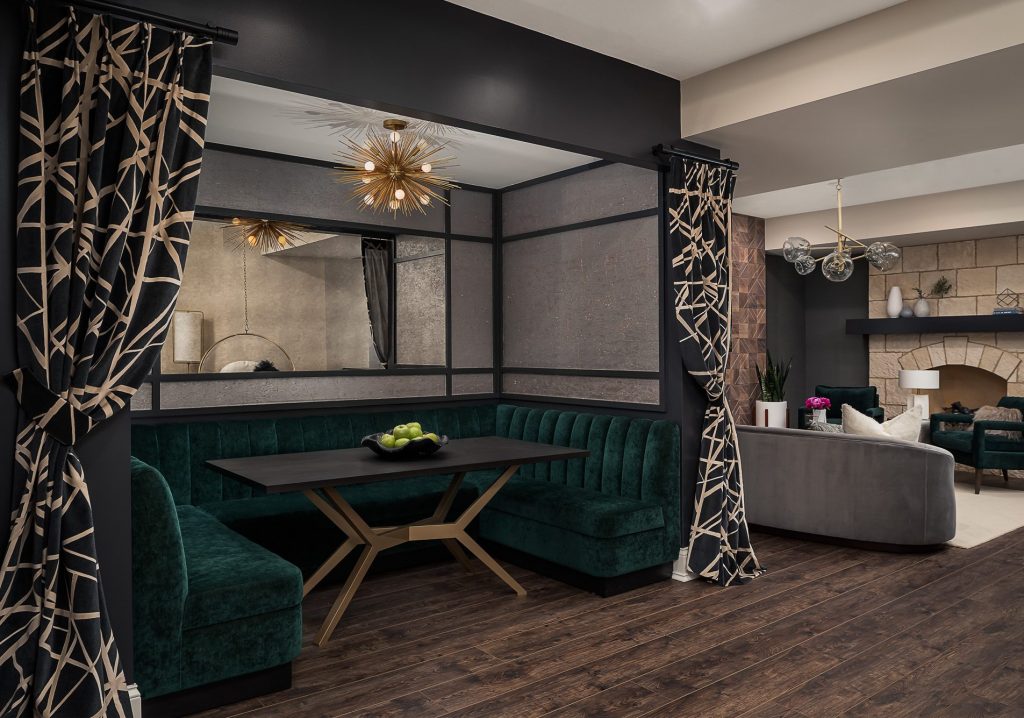 When this crew built their house 13 years ago, they finished the basement as a comfy indoor play space for their 3 young girls, full of dolls and dress-ups and a stage where a handful of off-offfff (we’re talkin’ waaaay off, but still thoroughly enjoyable) Broadway shows were performed for an enthusiastic audience of 3 counting Gus, the family pooch – and occasionally friends whose kids were also starring in the productions. (Cast members: deny it though you might, we hear there’s video proof.)

Years flew by, as they tend to do, and eventually sports and social calendars trumped dolls and dress-ups, and hanging out down there became less of a thing. Actually a complete non-thing. It was like the house wallflower – just kinda there, but not getting any attention. So they decided to show it some design-love and make it a place where people want to hang out again [cue 80s hit Reunited – feel free to sing along]. 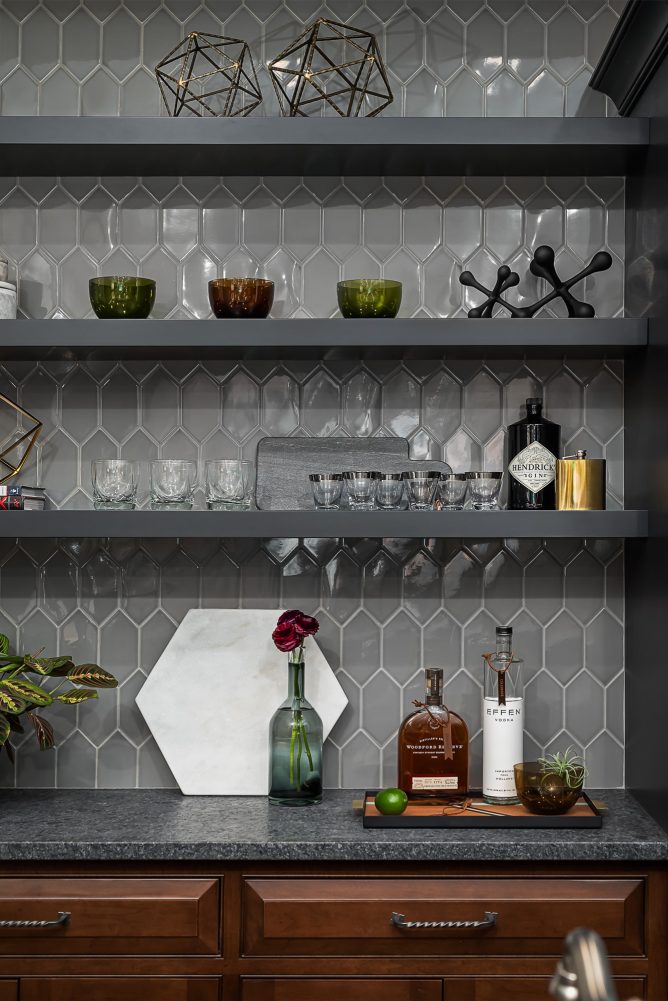 In the world of remodels, there are spruce-ups. There are makeovers. Then there are all-out “Let’s blow this thing up and start over” projects. This. Was that. The ubiquitous sofa/big-screen TV/coffee table combo was part the plan, but like an R or maybe a V on a list of alphabetized priorities. Their vision was glitzier. Less beer-and-Doritos*. More rosé-and-canapés.

*Apologies for the Doritos-bashing, it was purely to set the scene. We are not above Doritos, or even Fritos for that matter, and would not say no to a bag of Flamin’ Hot, should you happen to bring some by our studio.

They wanted it fancy-ish. But in a way that didn’t take itself overly seriously. Like the party bus of basements – you know, equipped for a crowd, with a decent sound system – ready with drinks and snacks and seating options and interesting lighting. Only classier, faaaar more stylish, with no tinted windows, an infinitely better bathroom situation – and, well, not a bus. (Ok, so the party bus was a terrible analogy. We’ll keep thinking…) 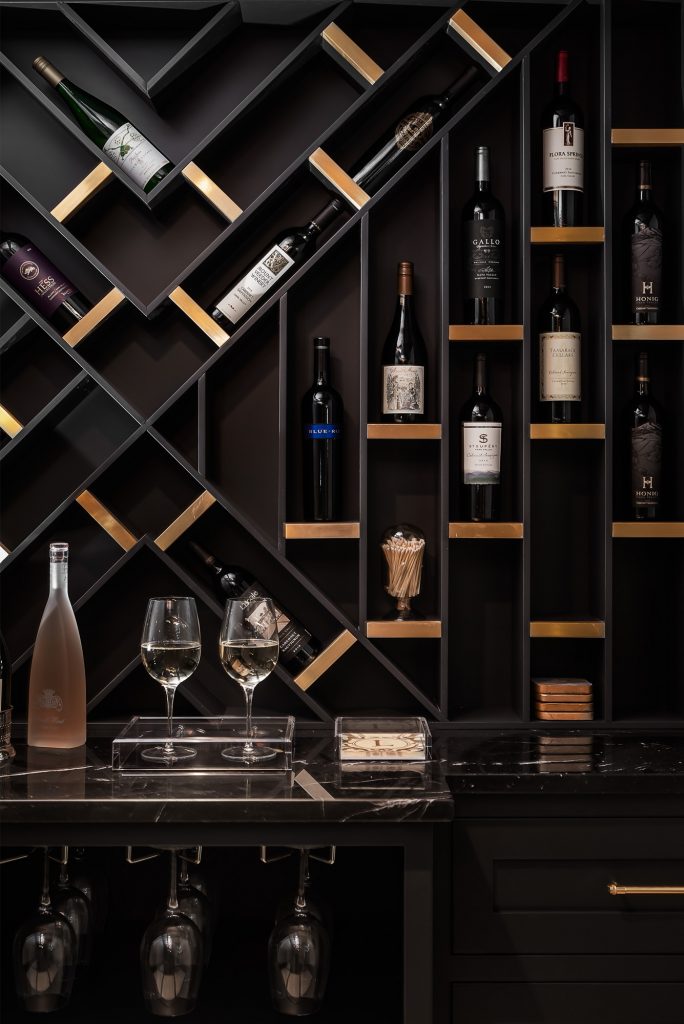 The wish list was long, but the space is large, so we were pret-ty sure we could make it all happen, from screening room, to game room to spaces for adult entertainment. Wait. No. Not that kind. What we meant to say was spaces where they could entertain like adults. You know, bar, wine room – and a table or two where they could shellac unsuspecting friends in a fierce game of Euchre or Pegs and Jokers. So we reworked the floor plan, creating multiple zones – each worthy of its own inspo playlist.

The idea was to swankify it, without leaving the rest of the house feeling confused about its style identity. The home itself is a refined French manor, all old-world wrought iron and limestone, and plays host to a steady stream of social gatherings large and small. The goal was to elevate the lower level as entertainment space that registers high on the glam-o-meter without feeling so clubby you need velvet ropes and a bouncer outside.

First things first. Wine room. To create the space, we had some demo-ing to do. We removed the former kids’ stage and tore out the ceiling. We won’t kick into full hard-hat/steel-toe-boot mode, droning on about ductwork and cooling units – just know we made all that behind-the-scenes magic happen so the wine can be its best self. Because the space was long and narrow, we enclosed it with glass to make it feel more open, installed a back bar with brass hardware and added a super-secret pass-through door (concealed by the metallic-flecked cork wall covering) that leads to the kitchen and game room. The floor is an Italy-inspired travertine mosaic grid with black marble border, and the ceiling has a black trim-work grid that mimics the floor. Then there’s the table… 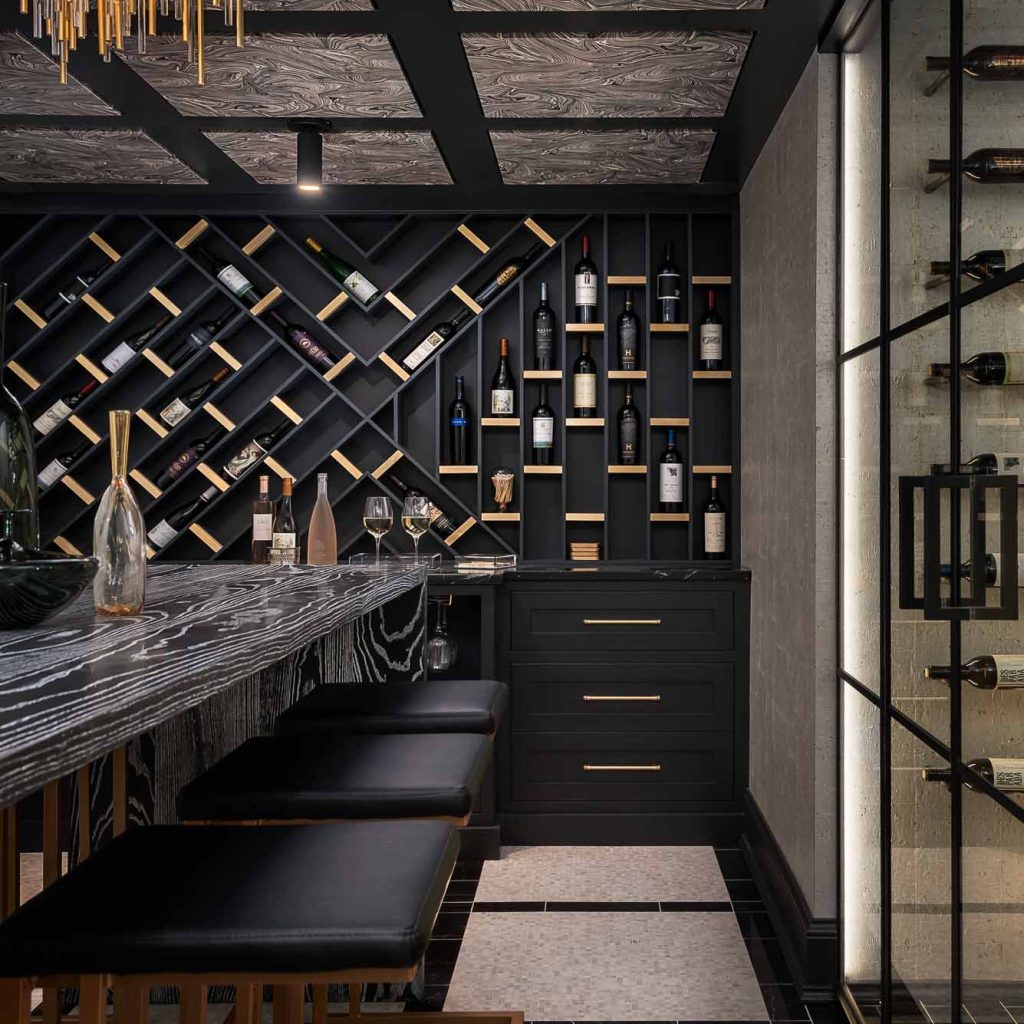 Ahhhh, the table. We had Aronson Woodworks custom design a rockin’ ebony high-top for eight that seeeeeemed like it would fit down that curved limestone staircase. Alas, it did not. Turns out, dimensions “is what they is” and there was no sweet-talkin’ those walls into budging. The white glove delivery guys measured multiple times, then looked at us the way people do when they feel sad for your lack of skills in the math department. Hmmm, hmmm, hmmmmmmm. It was pretty much a standoff: table vs stairs, with neither budging due to the uncooperative laws of physics. 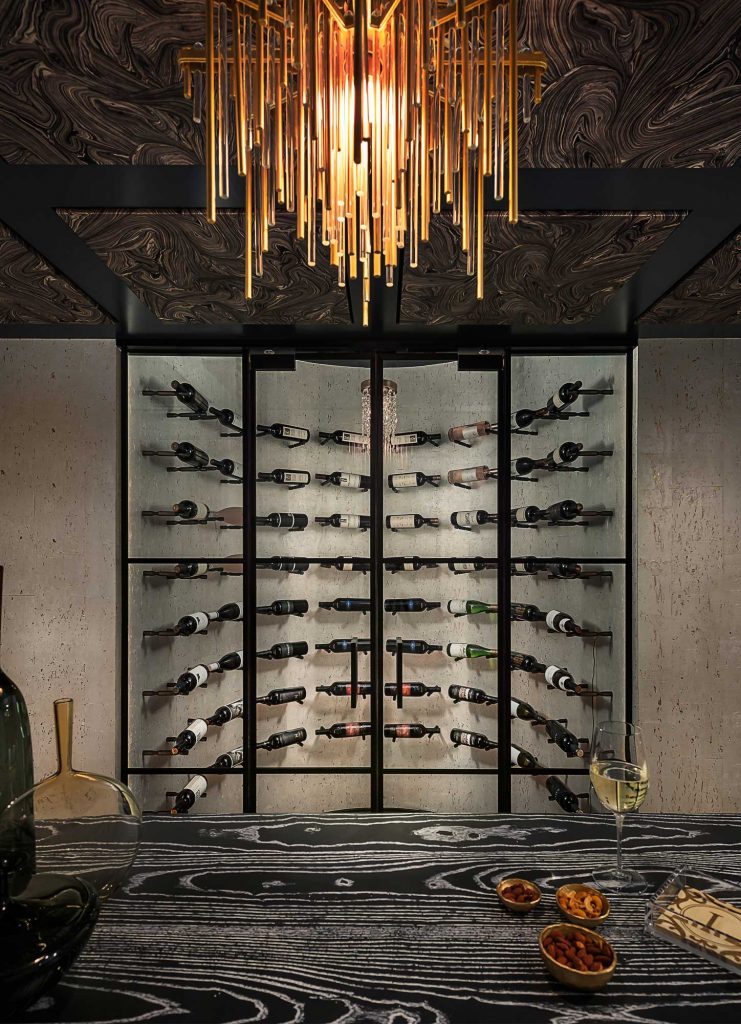 We shifted into triage-mode and talked about cutting down then re-capping the legs (possible but certainly not ideal) or maybe moving it in through an egress window. The delivery fellas tired of our alternate-scenario brainstorm and loaded the table back onto the truck. But a few minutes later we had them remove it and brought in our own subcontractors to give it another shot. We thought if we removed the railing and sconces, we might. Juuuuust might. Be able to get it down there. A quick mock-up out of 2x4s proved the plan was legit, and (amid lots of hands in the air and some loud whoop-whooping), the table made its snail-slow-but-still-grand entrance, legs intact. [Non-hyperventilating breathing resumes.] 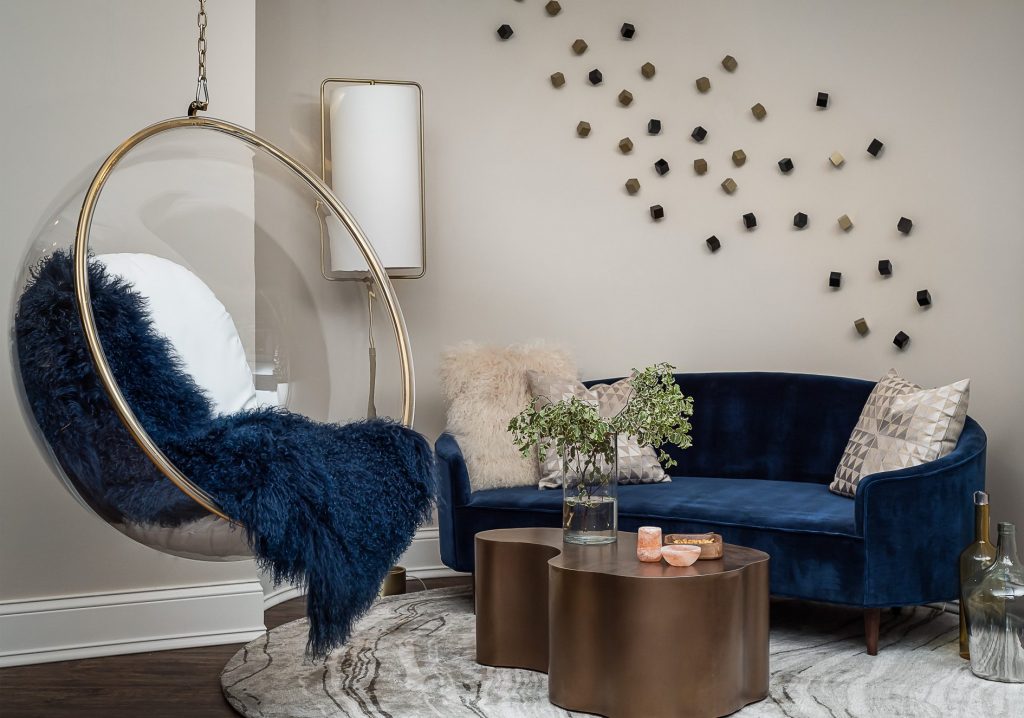 All was quickly forgiven between us and the stairs (no hard feelings, stairs – we think your dimensions are lovely – really), and we moved on to the little social area at the base, kitting it out with a sofa from Mod Shop, a Regina Andrews floor lamp and Arteriors coffee table. The final flourish was a brass-edged clear acrylic swing chair suspended from the ceiling – which, due to its popularity, may require some sort of online reservation system to avoid any tussles over who called next. 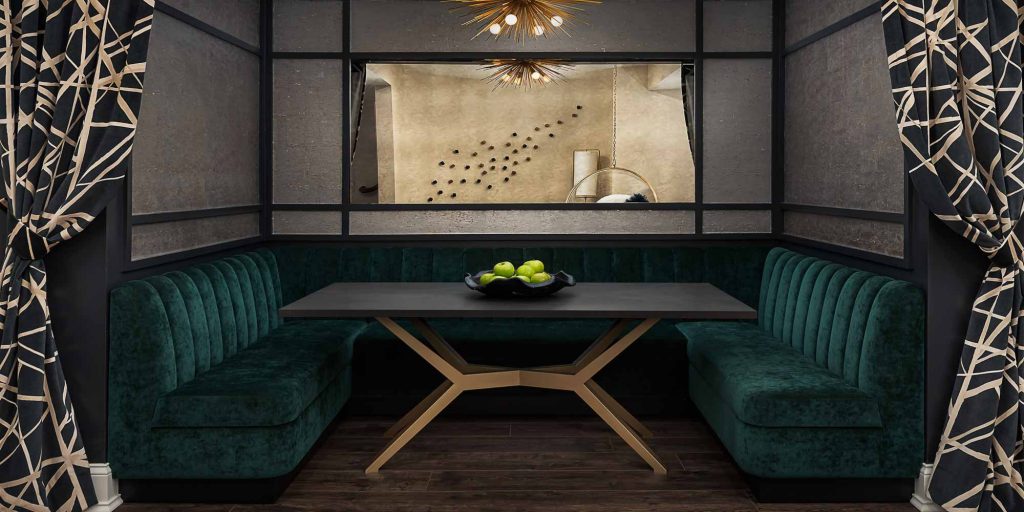 Directly across from that space (your view from the swing if you’re lucky enough to nab that seat), there’s a recessed booth area where we installed a custom emerald, channel-tufted banquette around the table. On the wall, we added an antique mirror surrounded by cork wall covering, and hung a glam, aged brass, mid-century-mod light over the table. Then we added drapery in fabric by Kelly Wearstler on the sides giving it the kind of vibe where you’re half-expecting a jazz quartet, or maybe a crimson-lipped chanteuse to appear – all well within the realm of party possibilities. 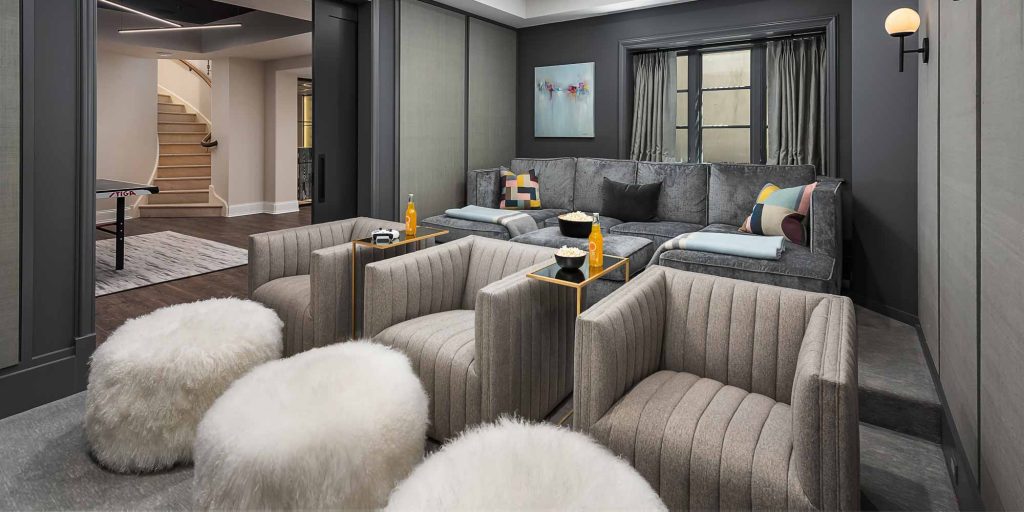 For the theater room, we had an ultra-lounge-y custom sectional made to perfectly fit into a snug space, with a platform underneath to elevate the seating a bit. Movies are awesome but loud, so we did our best to contain some of the sound by installing fabric-wrapped acoustic panels, making the walls around the space deeper and the entryway smaller, so it can be closed off to keep the action-movie explosions and Stallone’s “ADRIANNNNN” from reverberating all the way upstairs (though no one would complain if Eye of The Tiger made its way through the house at full volume). 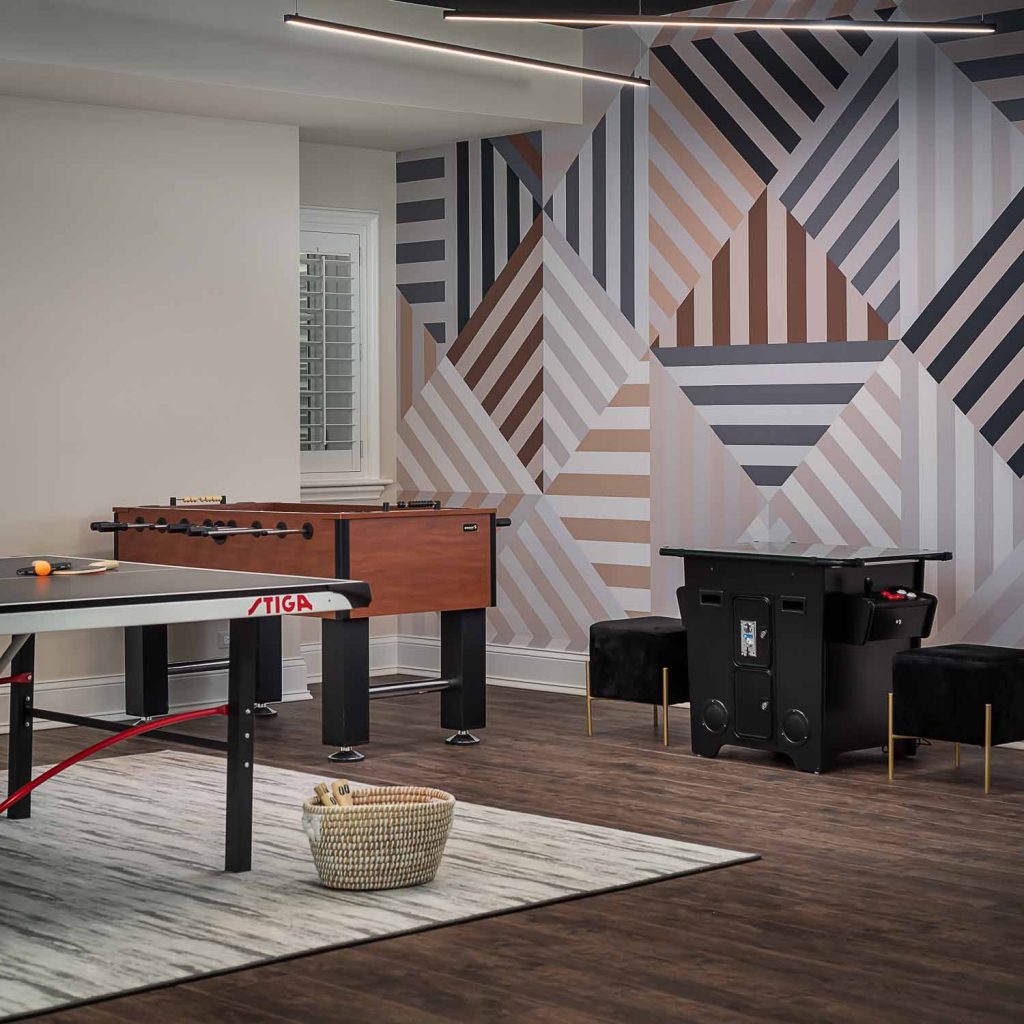 Ok. On to the games. Granted, this home already had a sophisticated, wood-paneled, fireplacey billiards room on the main floor upstairs perrrrfect for scotch-sipping and wildly-embellished tale-telling, but the wide-open space downstairs was begging for games that kicked the serious-notch down a level or two. Louder, livelier games like ping pong, Pop-a-Shot and foosball. We even brought in a cocktail arcade table with 400+ throwback video games (including 10 versions of Donkey Kong because there’s no such thing as too much Donkey Kong). To light the space, we pulled out the recessed fixtures, painted the ceiling black and angled a smattering of narrow 72-inch LED strips, hanging them at varying heights to create more visual interest. To add some polish, we covered the wall with a custom graphic pattern turned wall covering fabricated by Left Bank Art that pulled in the palette from the rest of the house, and added a broadloom rug. 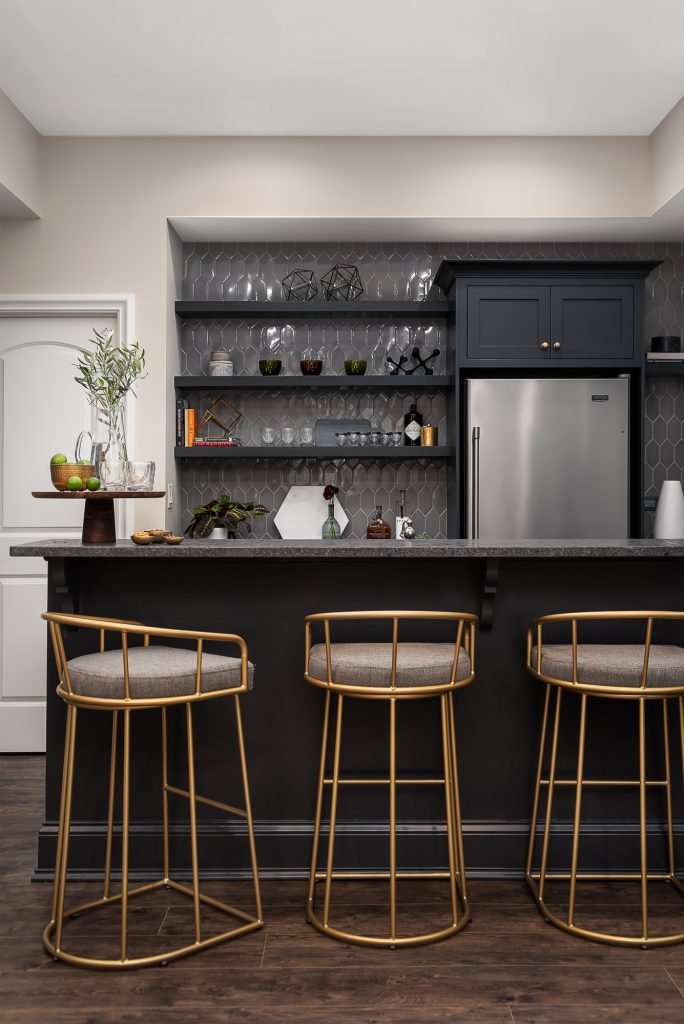 Mid-project, we decided to update the adjacent kitchen/bar area as well (nobody puts baby in the corner), replacing the yellow-painted walls with a light gray picket tile, bringing in a new leathered black granite countertop, and adding cabinetry and open shelves to the back wall so the existing fridge felt more built-in. We updated the bar stools too, so foosballers and Donkey Kong-ers could await their turn in style. 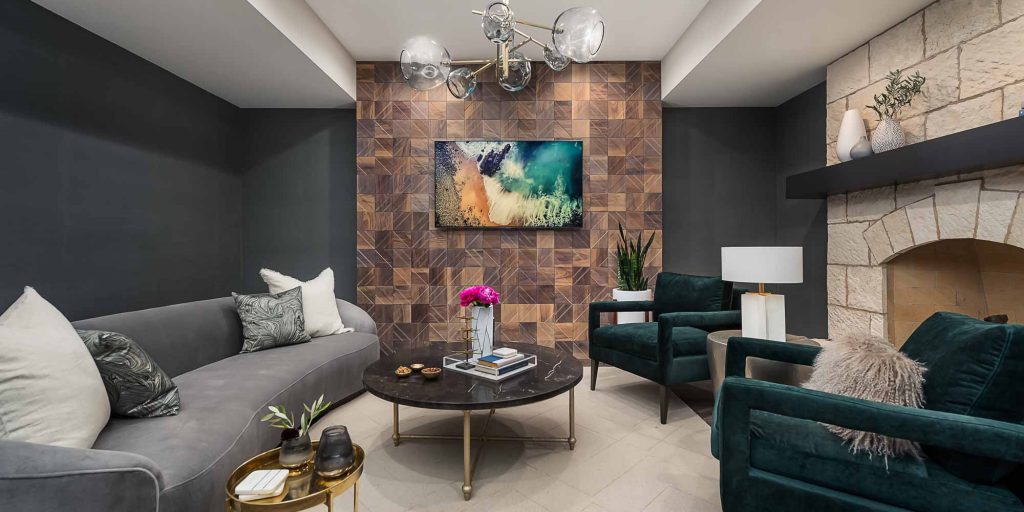 Off the ping pong/bar area, we created yet more hangout space with a big-screen for viewing VIGs (Very Important Games, of which there are mannnnny). We extended the mantel on the existing fireplace and classed up the TV wall with a random pattern of walnut wood wall tiles by Divine Flooring. We brought in a curved gray sofa and upholstered chairs from Storm Inspired, covered the adjacent walls with charcoal gray grasscloth, hung a stunning light from Regina Andrew (also available from Storm Inspired) and added a monochromatic rug in a geometric pattern. We were able to repurpose their existing marble-top coffee table by spraying the base to match the table in the nook. Consistency. 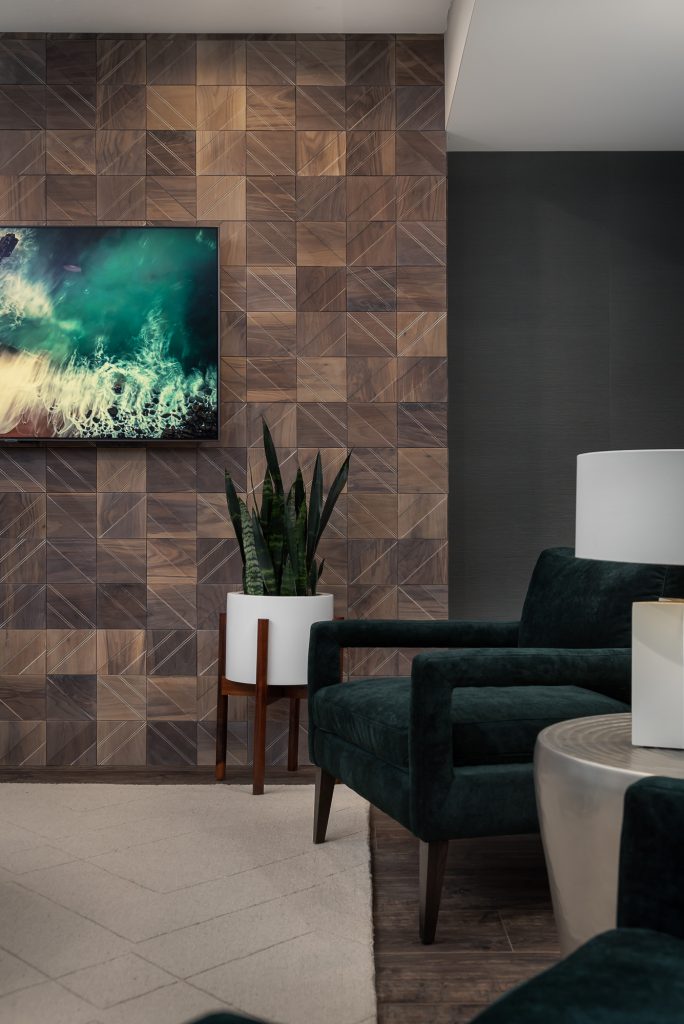 Because we had five different wall finishes and a lot going on in the space as a whole, we pulled a few common themes throughout to keep it feeling cohesive: aged brass on the lighting, a rich palette, soft textural fabrics and a bold, dark trim color. We chose Benjamin Moore Black Panther (purely for the fierceness of its name) and carried it through the base of the bar and surrounding cabinets, the trim around the nook, doors to the theater room and ceiling and trim in the wine room.

Now that the final touches are complete, we’re realizing it’s one of those spaces we hesitate to even call a basement. That word is just so basement-y. And this is not. We wouldn’t call it full-on clubby and it’s most certainly not an arcade, but borrows a few tricks from both. It has a glam-ness that doesn’t take itself overly seriously, and finds itself ever poised for impromptu gatherings of any type or size. It’s thoughtfully designed for grownups without alienating the kids. A place where Courvoisier and Corn Nuts can peacefully coexist.

All this have you mentally Pinteresting your own lower level? Feeling like maybe it’s due for a rethink? That can be arranged. We’d love to chat. We’ll bring the Corn Nuts.

Until next time… thanks for reading!