BARN WOOD WALLS ARE AWESOME. ONNNN BARNS.
BUT MAYBE NOT QUITE RIGHT FOR A SWANKY HOME OFFICE/LOUNGE SPACE.

We can’t recall what we actually said when we first saw the “before” version of this Glen Ellyn home office remodel. But we can tell you what we were thinking. Something along the lines of “Wowww. That’s a lotta barn wood.” Don’t get us wrong. We like us some reclaimed wood. It was just. A lot. 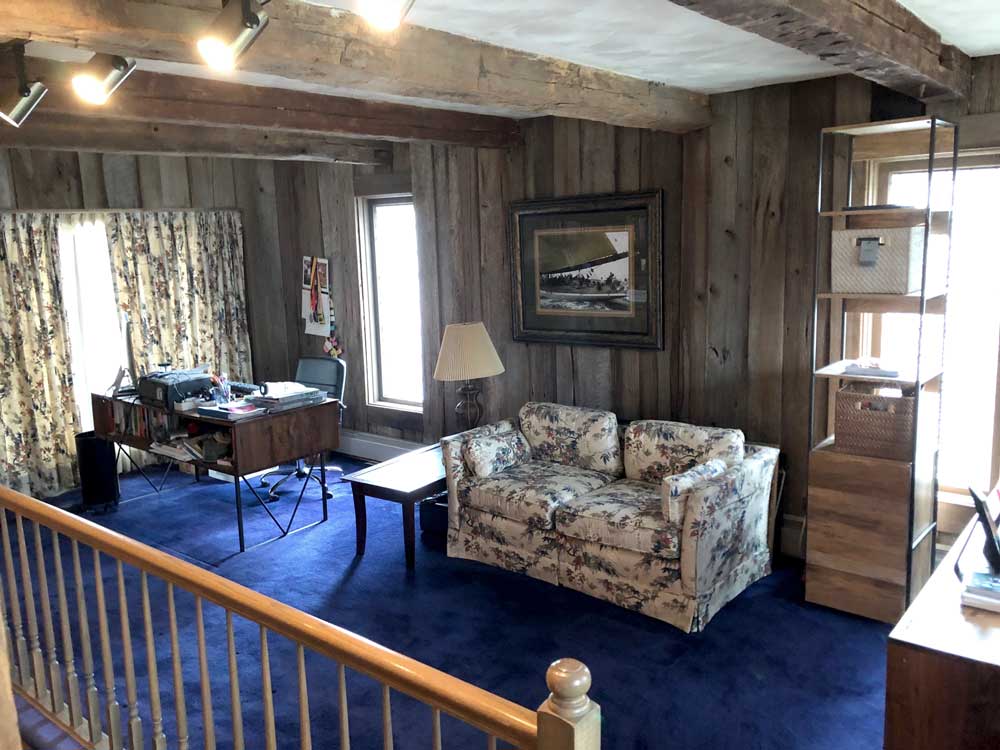 The homeowners had purchased the house from family, and the former owners had salvaged the wood from the family barn in southern Indiana many years prior. They proceeded to go all-out, using it to clad the entire room, including beams on the ceiling. The new owners wanted to keep the beams, but were ready to say a not-so-sad farewell to the wall paneling. We kept a few of the pieces to make a custom coffee table (and later a killer dining table) since there was some sentimental value there – and sent the rest off to reinvent itself once again. Like Madonna. 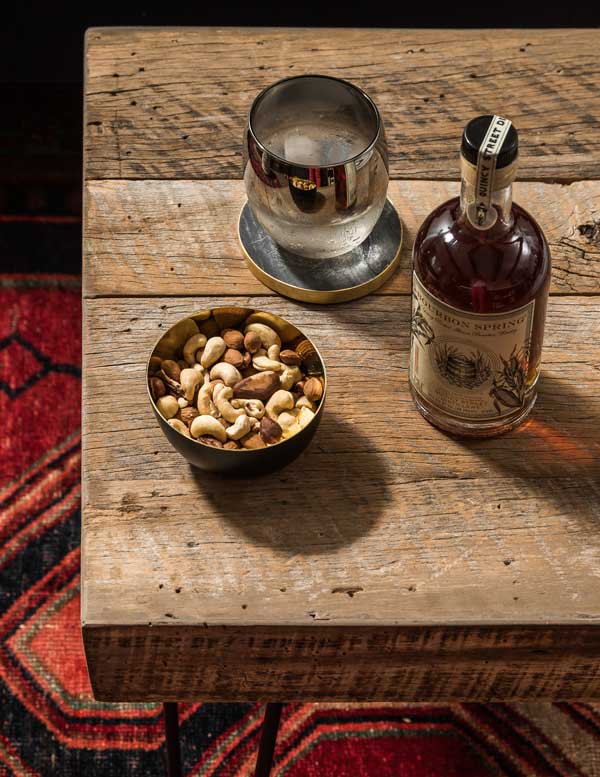 Our marching orders were to create a lighter/brighter, less hoedown-ready home office that could double as lounge-y bar-slash-hangout with a mid-century vibe. After taking a good look around, we decided, like with a clearance sale, everything must go. For starters, the navy carpet, leaded glass windows, floral curtains and sofa. Eviction notices don’t really work for that sort of thing, so we had our contractors remove them to make way for new everything. 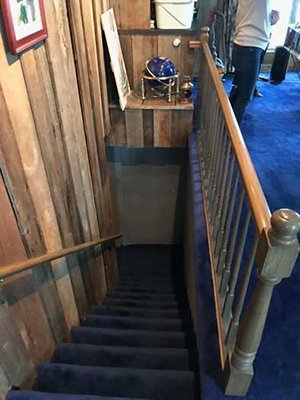 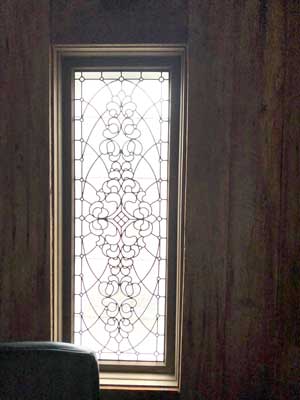 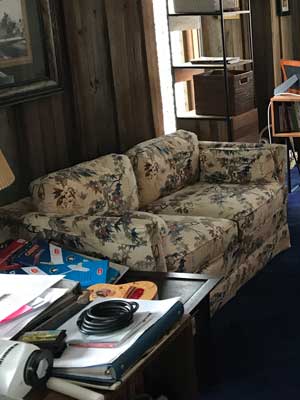 As with every project, we encountered some challenges that required some turbo right-brain power. Because the space was originally a one-car garage, it was on a concrete slab, so the  old wiring and baseboard heating vent/ductwork situation needed to be addressed. And as we were removing the weirdly thick popcorn ceiling, we noticed there were big holes where the beams shouuuuuld have met the ceiling, buuuuut didn’t. Then we remembered we had a truckload of barn wood we’d just pried off the walls. Yo. Filler found. 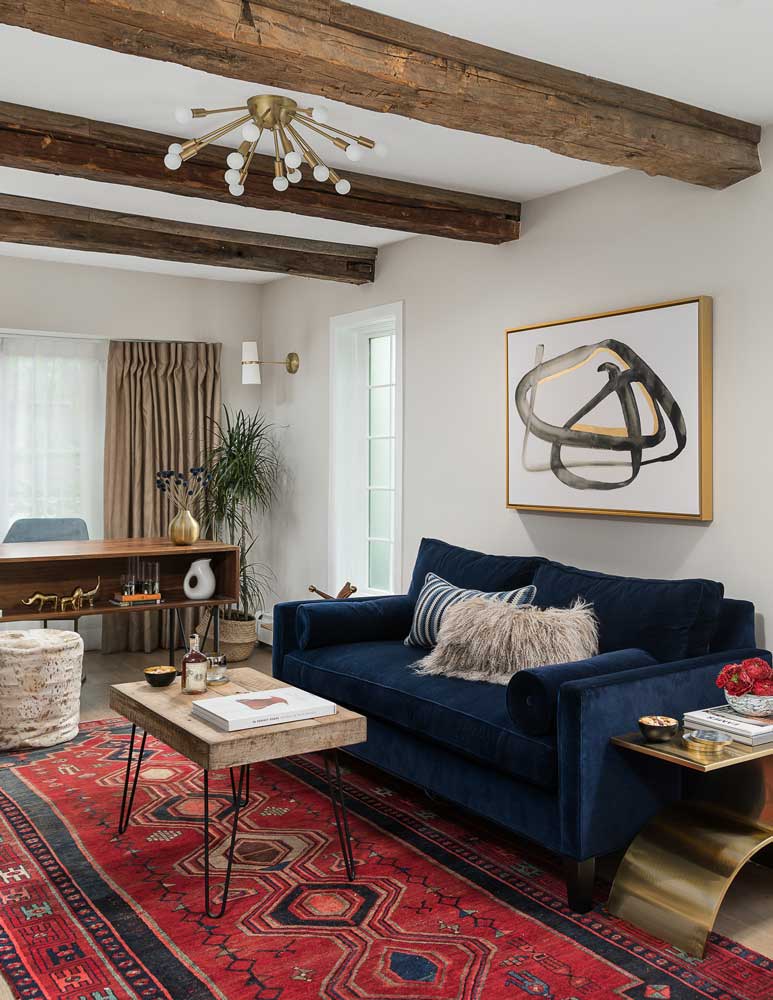 We offered up options on the floor plan, and they picked the one starring a clever strategy to replace the stair railing with a long built-in credenza that served double duty as stylish storage and half-wall along the staircase. We’d seen similar setups incorporated into European interiors to maximize the functionality of small spaces, and figured we’d give it a whirl. Then we had lamps custom-built into the cabinetry, so they wouldn’t accidentally tip over and fall down the stairs. The built-in also disguised a huge (and PS, hideous) vent and motor for the baseboard heat pump. No one needs to see that. 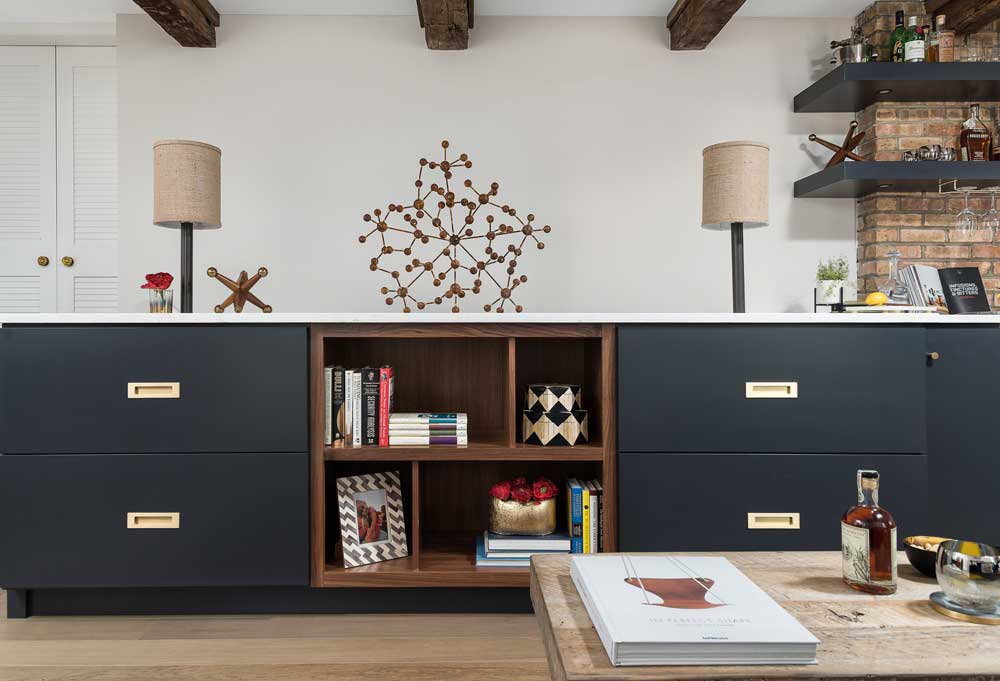 For the clubby bar area, we went with a dark charcoal paint, natural walnut and smoky mirror on the cabinet doors, and added wine storage and floating shelves with puck lighting underneath, plus a rack for glasses. We left the brick wall as it was (it worked!), and brought the counter out to accommodate (and camouflage) the office printer. We even sneaked in a pop-up outlet on the back of the counter for charging phones or powering the blender for tiki drink. 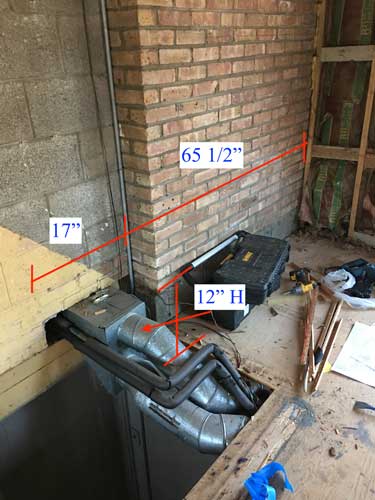 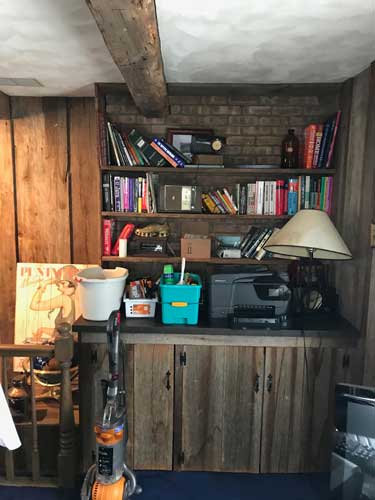 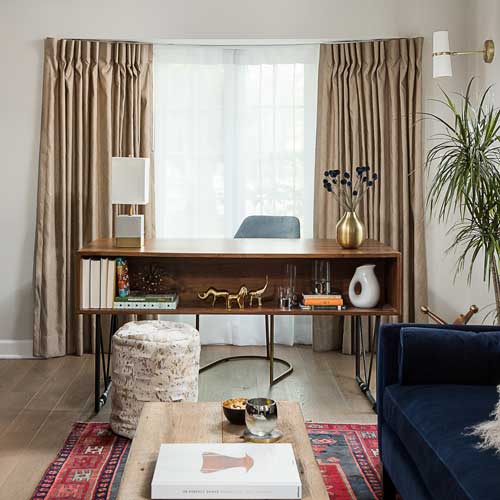 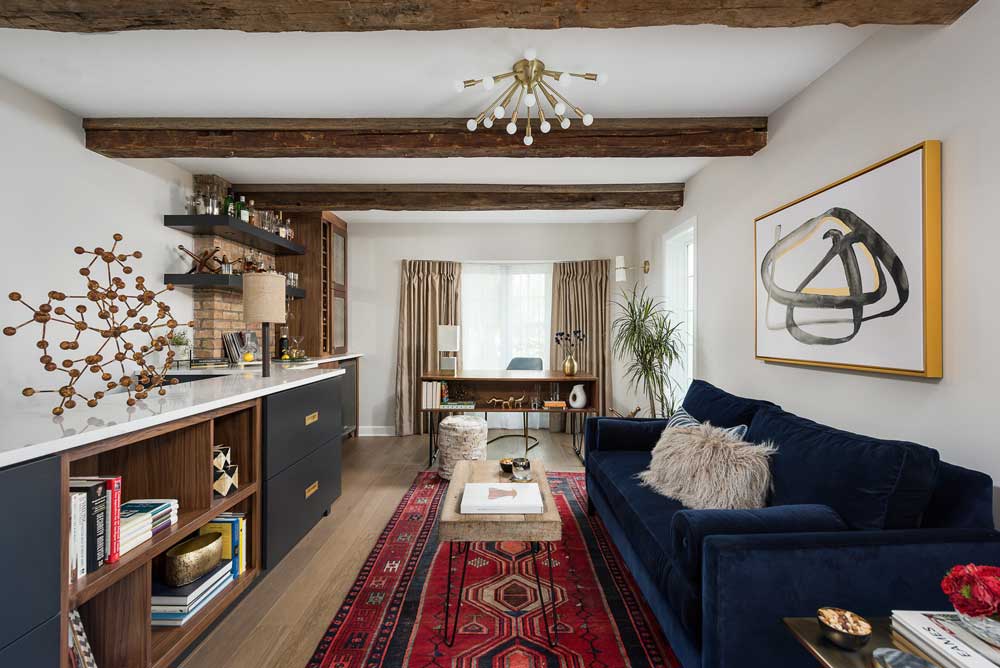 With the home office fini as they say in France, the couple is contemplating which room is next up for some Designstorms love. If we were bettin’ people, we’d say…kitchen? Hope so. We’ve already got some ideas we’re kicking around. Maybe we could discuss over tiki drinks in that swish new lounge of theirs (hint, hint).

All photos by Picture Perfect House (Thanks Marina!)