When the homeowner’s day job is New Arcade Game Dreamer-Upper, you know the basement design is gonna be goooood.

Yep, we’re back on the topic of THAT basement (see our previous blog post). Not because we’re obsessed. Ok, maybe a little. But now we have pics so you can fully appreciate that back bar in all its Pac-Man glory. Though it pains us to say this, basements sometimes get the shaft. Homeowners may have blitzed through their budgets doing up the kitchen (no judgement here). Or they’ve got a case of construction fatigue and just want to be D-O-N-E with decision making. So they’re content to default to the still nice, but fairly standard man-cave or kids’ play space. Not so here. This basement got its due and then some. 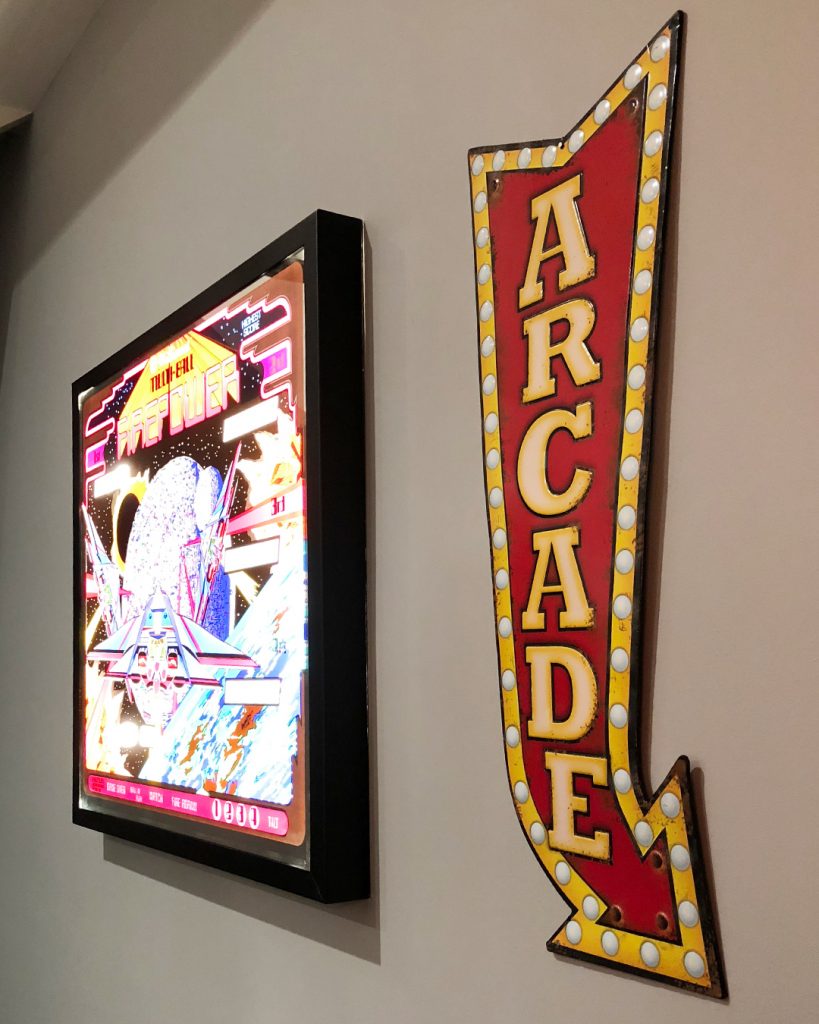 Enter The Arcade, with so many bells and whistles, it could practically be a rent-out party venue.

It’s part bar/hangout, part arcade-game art gallery. (Even part arcade-game hospital – there’s a repair shop hidden down there too.) A super-techy, thoughtfully considered ode to gaming, past and present, from a homeowner who has spent his entire career inventing, collecting, tinkering with and obsessing over arcade games. 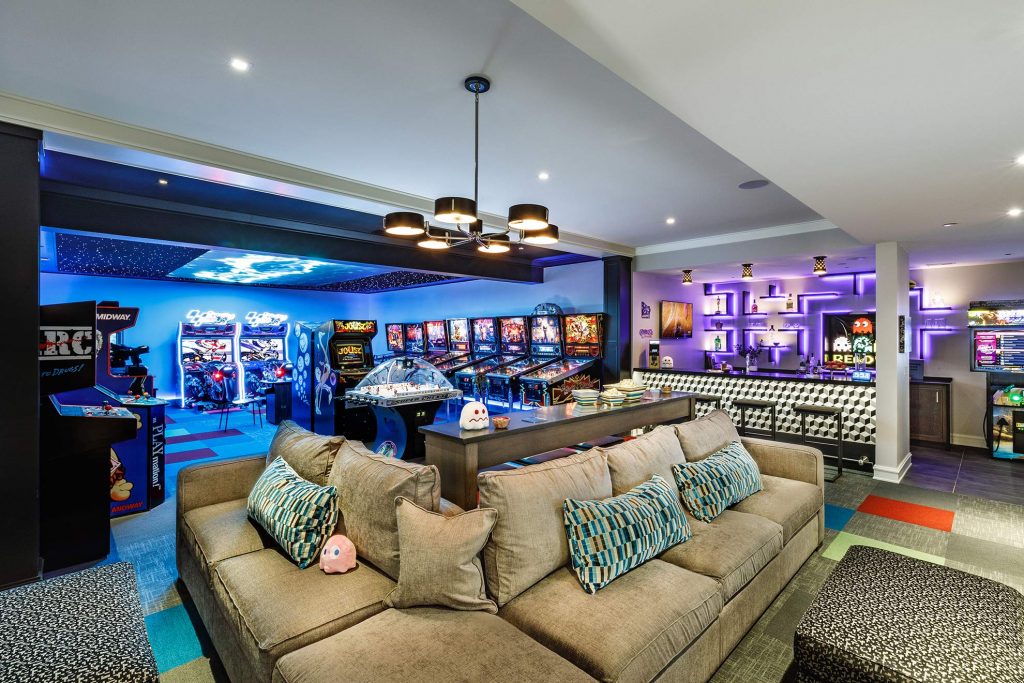 We knew going in that there would be an arcade, but once we heard they wanted a pretty elaborate bar setup as well, we got to work and designed two. One with a motherboard-like design for the back wall, and one Pac-Man inspired, since – well – it doesn’t get any classic-er than that. He chose the Pac-Man route, but decided it wasn’t enough just having the back bar shelves placed to mimic the game graphics. He wanted them more arcade-like. As in backlit. Sounds simple enough, but ended up taking two designers, a commercial lighting specialist, the electricians, millwork contractor, AV specialist, GC and homeowner – eight of us(!) – to tame that beast. Here’s why. 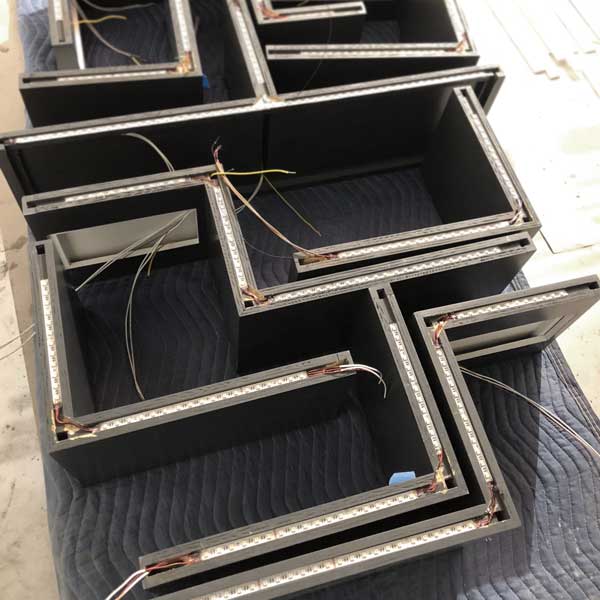 The shelving needed to be cantilevered off the wall, and built with a cavity inside so the lighting would glow above and below the plexi-glass. It also need to be able to support the weight of the bottles and glassware. Once we mapped out where the shelves would go, we placed plywood on the stud wall, mounted metal peg brackets to the plywood and pulled the electrical wiring through the pegs. We pre-cut the drywall to match the Swiss cheese-ish peg layout. The spacing between the shelves was in 10-inch increments, and the homeowner literally got out the tape measure and double-checked them for precision. If they were even a teensy quarter-inch off, we re-cut them. Then we mounted the cutout drywall over the plywood, filled in the gaps with foam around the pegs and painted it. (Are you still with us?!) Next, we slid the shelves onto the pegs, each with a light source inside that we connected to the wiring. It took us a few tries to find the right type of plexi, so the light would glow, but you wouldn’t see spottiness. If it was too transparent, the wiring showed through – too opaque, and the lighting didn’t have enough glow. And the glow was critical. Third try was the proverbial charm, and the color and intensity of the light can be dialed up or down (backlight or shelves only), all via iPhone. Oh, and that sleek statue on back bar shelf that looks Oscar-esque? It’s an award for Terminator 2, Arcade Game of the Year. (Immmmpressive.)

Just as the back bar wall couldn’t be any ole back bar wall, neither could the ceiling be a plain ole ceiling. Drywall? Pfft. No. This ceiling called for a series of 12×12-inch 1,000-pixel video screens, together creating a massive 10×16-foot overhead screen, surrounded by twinkling starlights. The homeowners can control the video feed to show anything from a football game or video game graphics, to kinder/gentler, more ambient scenes, like puffy clouds slowly moving across the sky. The screen offers juuuust enough lighting to eliminate the need for additional ceiling fixtures. 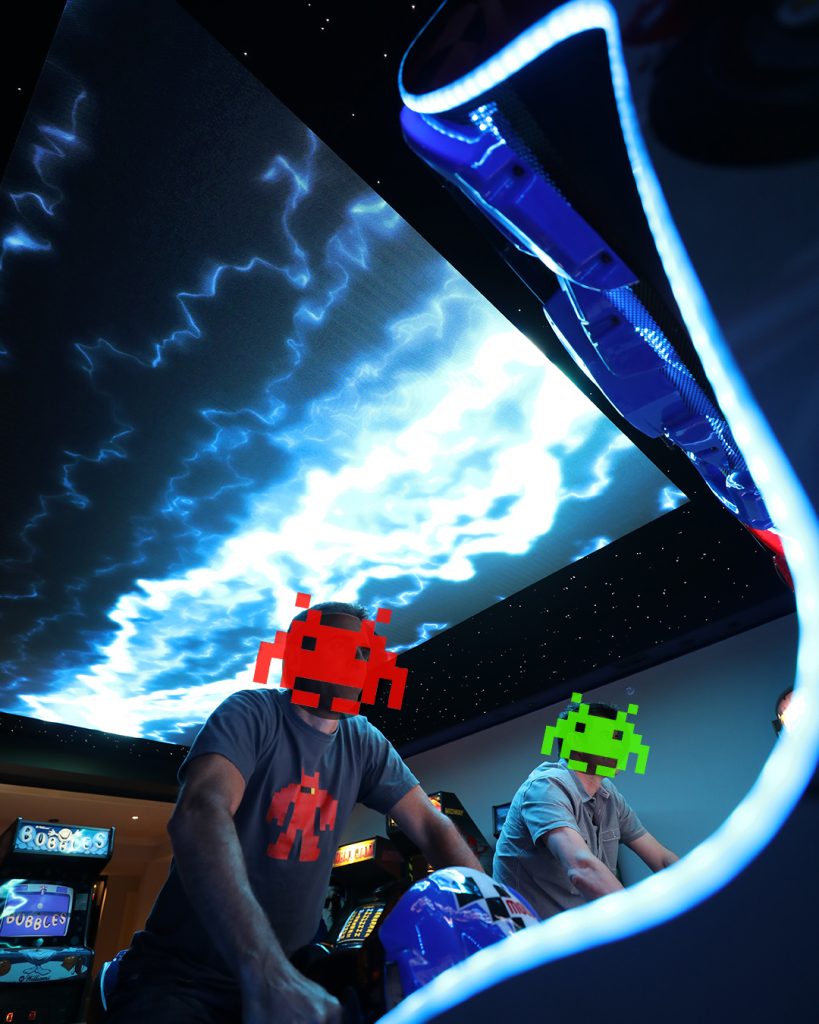 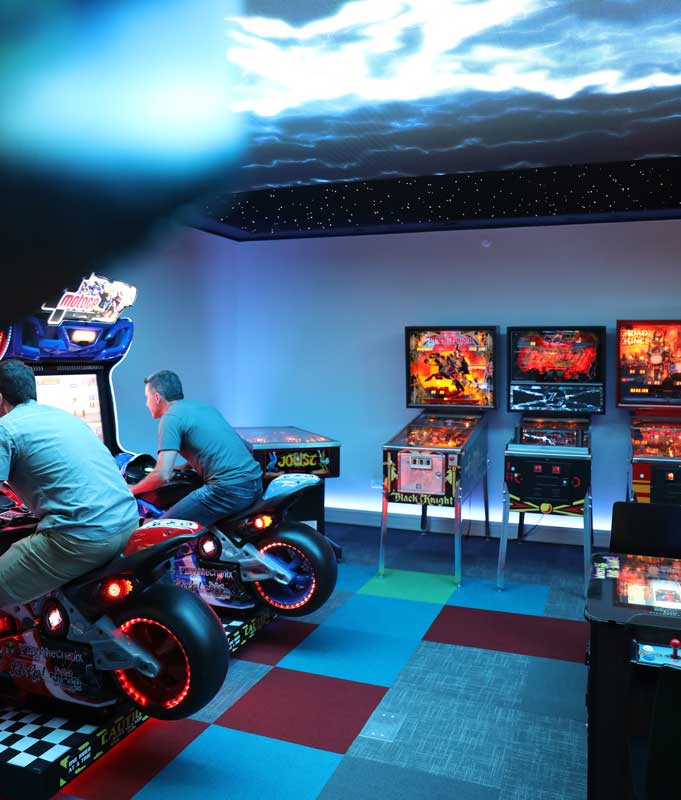 Due to the complexity (and ultra-cool insanity) of this whole setup, we had to have the furniture and arcade layout completely resolved in the earliest phase of the project – before pouring the concrete(!) – which is not the typical order of events. But then again, there was nothing typical about this whole gaming wonderland situation. So work ahead we did, making sure all the electrical was perfectly placed and pulled through for the arcade games and entertainment systems before they laid the concrete heated floors since we couldn’t drill into them after the fact without messing up the heating elements. Then once the floor was poured, we installed carpet tiles to give the space a pixelated feel, mostly gray, accented with core gaming colors like red, green and blue. We even tucked LED strip lighting behind the baseboards around the entire perimeter for additional subtle floor-level lighting.

For the TV/gaming stations, we devised a reverse sectional (a Designstorms first!), with each of side of the sofa angled to face a different TV screen, so groups can game simultaneously. There’s a console table behind the sectional, with bar stools and popup outlets so additional gamers can join in on the big-screen action, or express their strong, independent spirit and play something else on a totally different device. 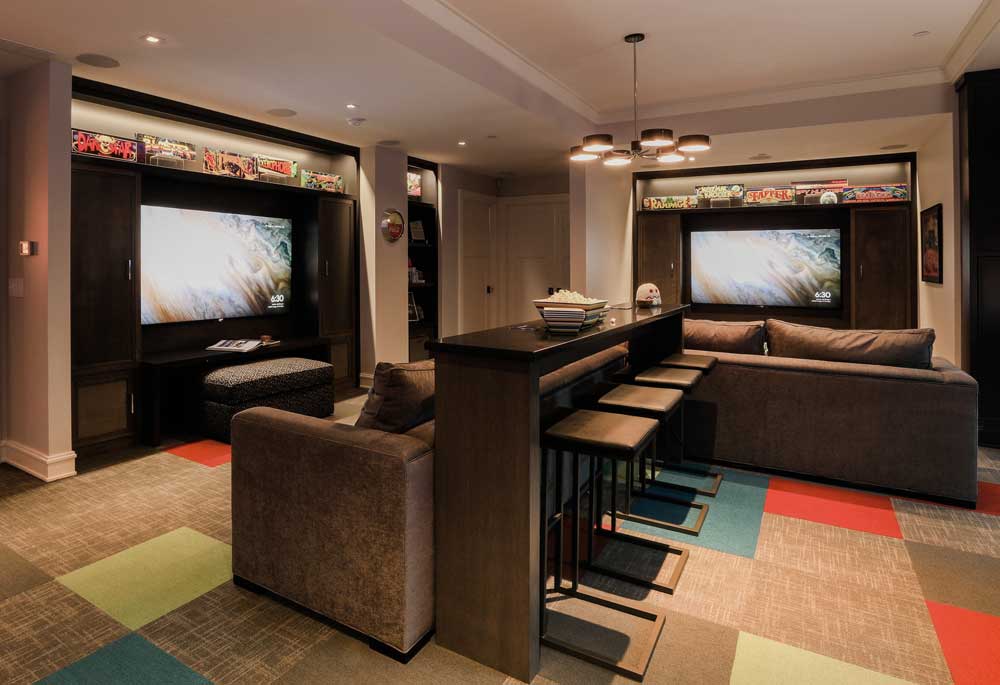 Even the TV built-ins got the arcade treatment, with video game marquees from the homeowner’s enviable collection displayed on the lit shelves, along with a handful of board games that are actually based on arcade and video games. (For real. Who knew such things existed?) We also selected some other pinball signs to display in the hallways, framed and pegged an inch out from the wall to accommodate the back lighting (another design first for us).

Arcade style was our story and we were sticking to it – which meant, yes, even the bathroom.

The ask? A shower wall graphic of the Space Invaders opening up the space/time continuum and bursting into the shower. Right. Ok. Let’s just say our graphic designer clocked some serious quality time with a bazillion 1×1-inch tiles onscreen (go Josh!) to get it exactly right. An Atari purist at heart, the homeowner insisted that it be legit, and legit it was. So much so that the tile installer stared at us for a second before laughing hysterically for a full minute when he saw the pixel art pattern he had to replicate with actual tiles. He was able to finally get a grip and breathe again once we told him we’d done the tedious part and actually had the pieces pre-laid out. All’s well that ends…with Space Invaders in the shower. That’s our new motto. 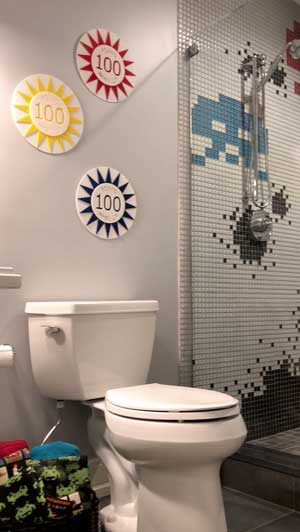 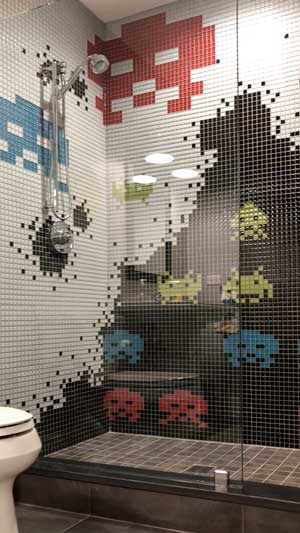 We shot the exterior as well, since it’s pretty sweet too.

If you were on the Infant Welfare Society Housewalk back in May, you’ll remember the landscaping was, um, let’s call it “still a work in progress” (read: mostly mud). Our friend Paul Couture (Couture Landscape Construction) has now worked his tree-and-shrubbery magic, so we grabbed a few shots. 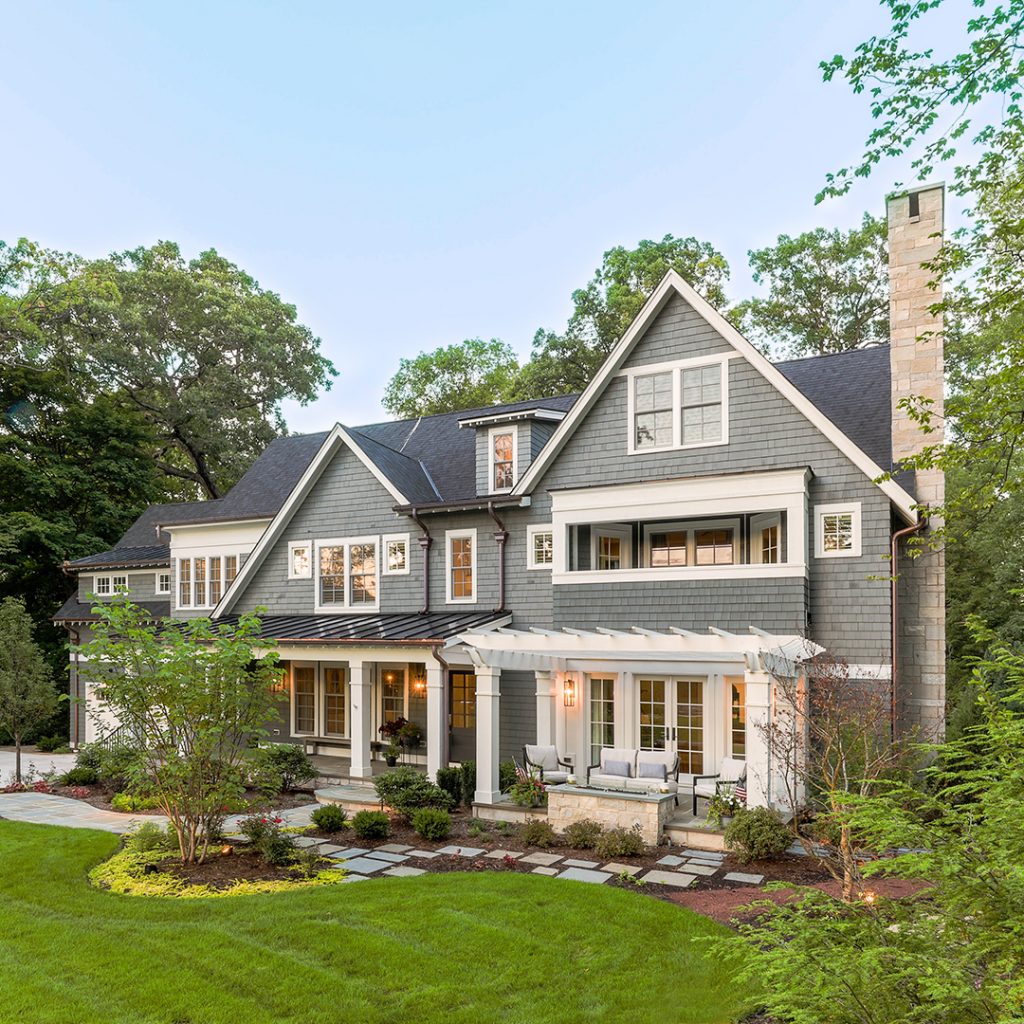 The Jamie Simoneit / Z + O architecture rocks a classic New England Coastal vibe, with real-deal deets like copper gutters, wood shakes, arbor over the front patio and bluestone porches. If you’re digging that deep blue-gray, just know it took more than a few custom mixes to get the richness right. But we got there. And it’s gorgeous.

Woods in back. Lake Ellyn in front. It’s a standout beauty with a blend-in traditional-ness. Clever disguise for that basement arcade, huh? We’re talkin’ goooood. Like CIA-good. You’d drive right by and never know. Except now you do.

Did you read our other post about this Glen Ellyn new construction and arcade basement project? Check it out! Or see more from Designstorms here. Or shop Storm Inspired, our Amy Storm-curated online/retail store that’s open to anyone! Local? Stop in and say hello!