Coach house and separate recording studio complete – annnnd, curtain. (Should we bow? There’s clapping. Feels like we should bow.)

Adding this coach house and recording studio(!) to our list of firsts. (Kinda hoping we can use it sometime to amuse ourselves with cartoon voices.)

Coach house is a decidedly modest descriptor for this mini-me house next to the larger-scale main house. But this is not the “understudy” kind of coach house, sitting around, awaiting its turn in the spotlight. Nope. This one’s a star in its own right. A hard-working, multi-tasking, great-looking space that doesn’t just “double as.” It “octo’s as.” Seriously – it’s like eight things in one. Home office. Entertainment space. Recording studio. Theater/viewing room. Entertainment space. Kitchenette. Guest quarters. Family hangout. And general all-around getaway space. WITH – PS: a spot to discreetly display little doo-dads like, say, a Grammy(!). And a Tony(!). And some NFL memento-y things you only get when you’re actually(!) in(!) the NFL(!). 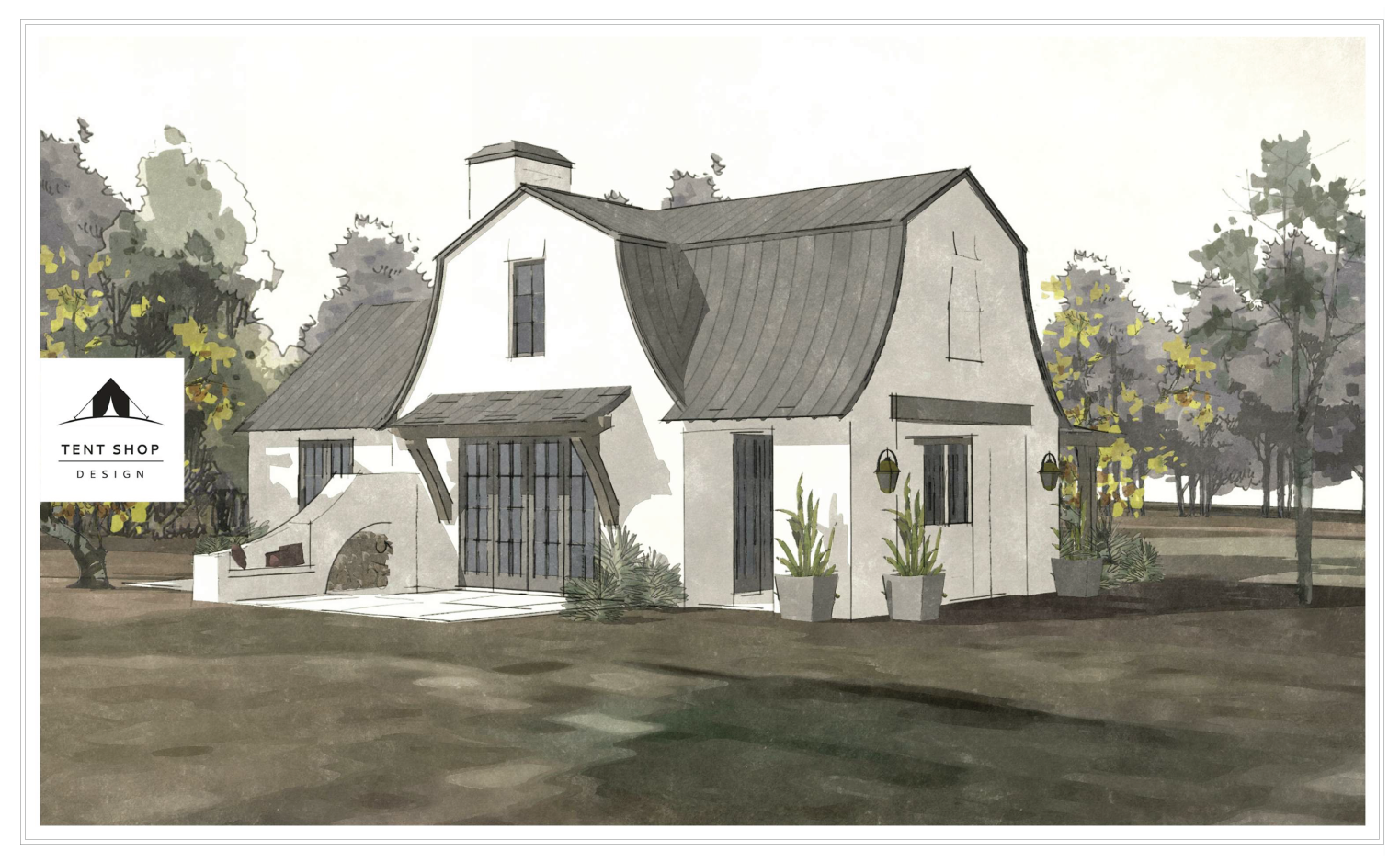 This project had already been rolling for a few years (on paper anyway) with an Alabama-based architect – and was experiencing that odd lull that sometimes happens between design and construction. There were many, many, mmmmmmannnnnny drawings, and it was finally time to get this thing BUILT. Two years is a long time for a project to wander through the blueprint wilderness without ever getting to the promised land of tangible progress.

Enter local builder PJ Murphy and design team Amy Storm & Company (scattered applause from a few fans in the crowd). We joined rockstar architects Tent Shop Design, who stayed on and worked with us closely – we speak figuratively, as they’re Birmingham based, so not exactly next door. We pored over two years’ worth of addendums and revisions, trying to decipher which of the drawings were the ones we should pay attention to, and which we could deep-six. A tedious and time-consuming task to be sure, but we wanted to be respectful of the original intent while enhancing and improving things wherever we could. 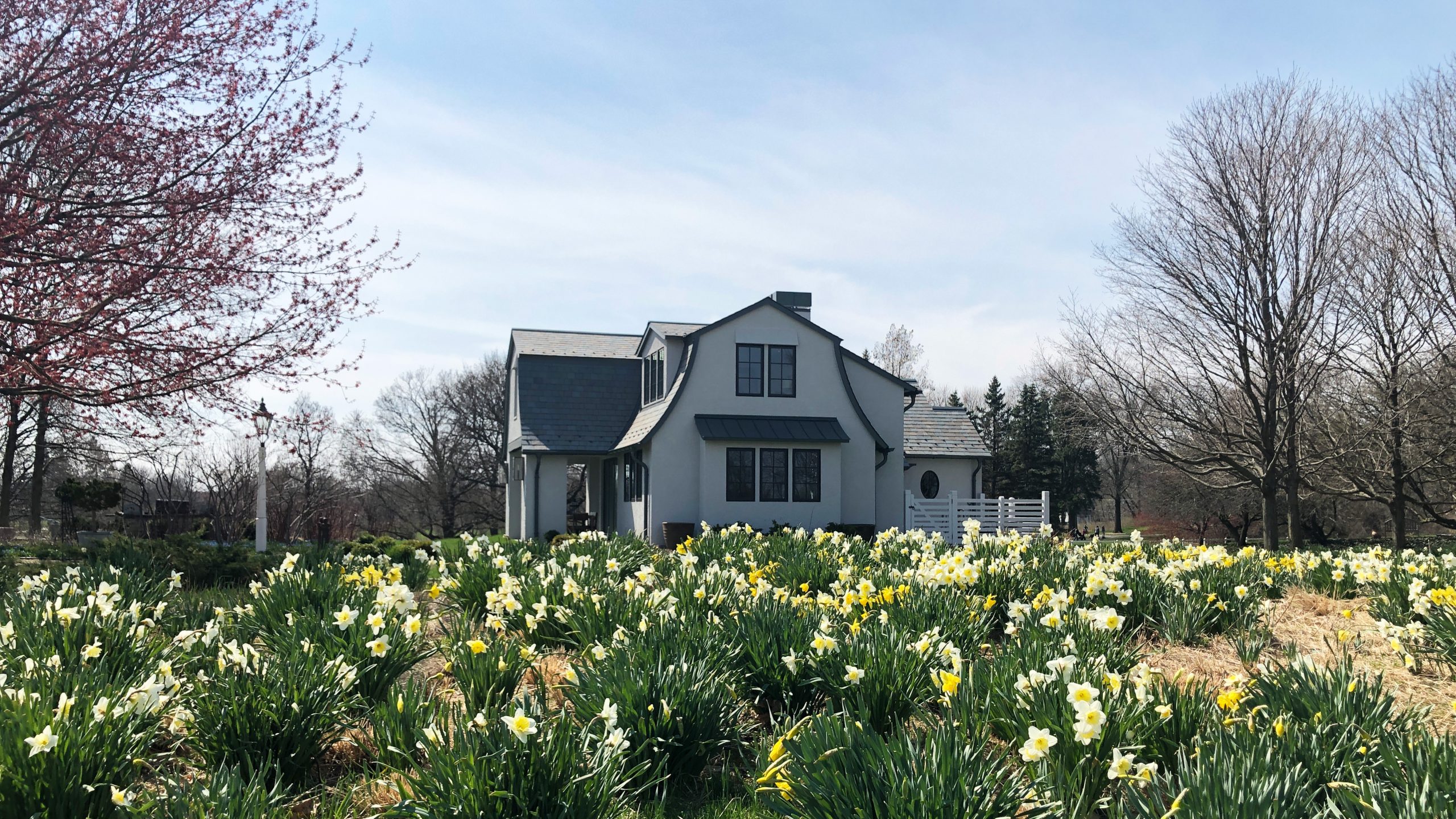 Like a temperamental push mower that may need a few pulls on the starter cord, we got the project going again, sorted out the blueprints and outlined an ambitious-but-doable schedule with a clear plan of actionables. (That mower reference just now got us thinking about the lot, which we feel we should mention is huuuuge and nature-y and particularly cheery at the moment, thanks to the previous owner who went completely gangbusters with the daffodils, planted in small clusters of 3 or 5 evvvvvvverywhere. We tried to tally ‘em up and lost count at about 463,521 or so. But seriously. There must be millllllionnnnns. Lift pinky finger to corner of mouth and give it your best Austin Powers.)

Designed to complement the main house, the architecture has the same unique, slate-clad roof and stucco façade. We installed custom copper lanterns and a bluestone patio with outdoor fireplace and niche for storing wood. The main living space boasts a NanaWall system with pivoting doors that push open to the patio, where there’s a walking path and small pond just beyond. It’s a great way to pull the outdoors in, and opens up the space between the house and coach house so it’s really fluid and cohesive. 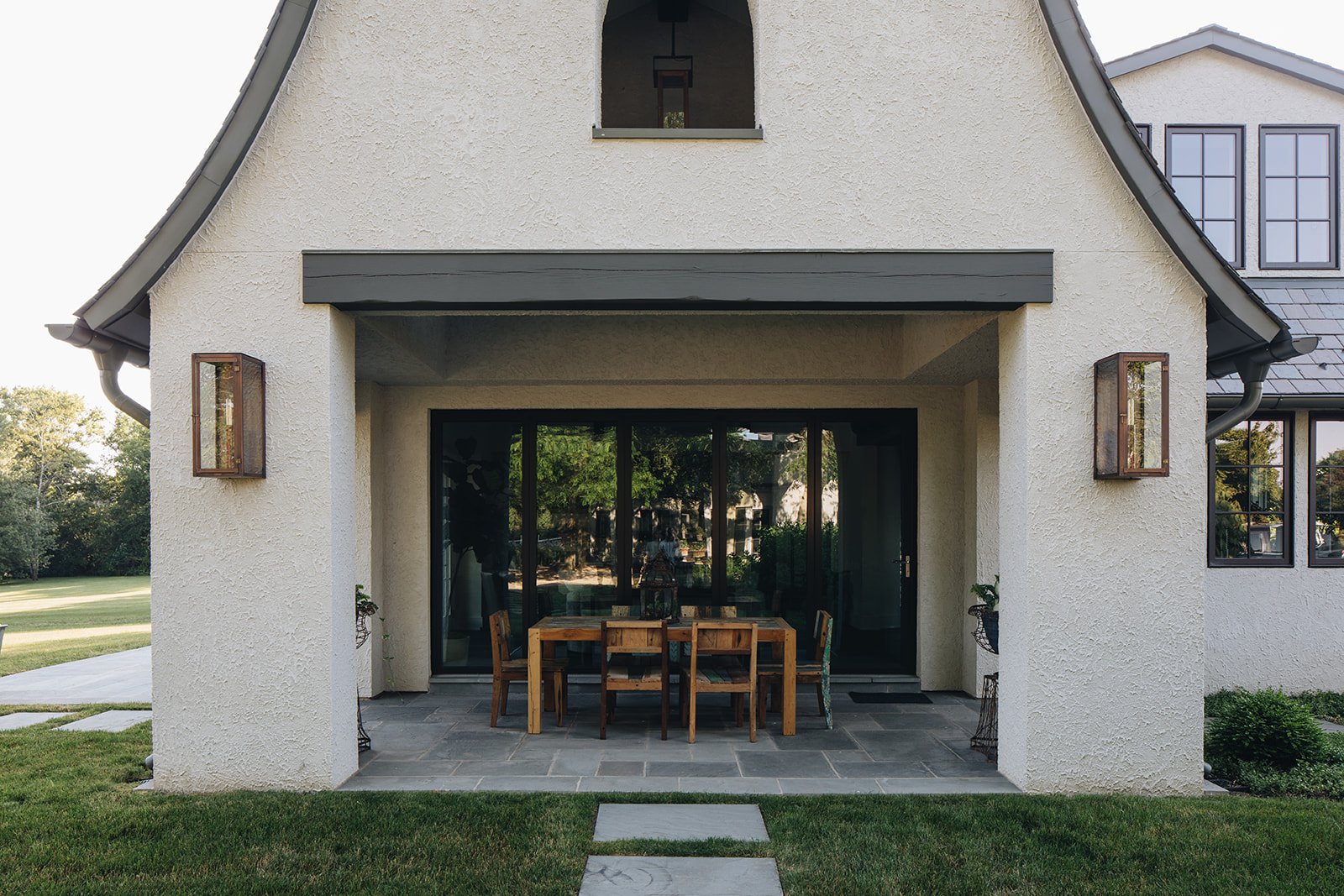 The owners’ vision was to keep it simple. Uncluttered and open with a structural, minimalist feel. We took the simplicity directive to heart and committed to one shade throughout. ONE. First house of all time in the history of Amy Storm houses with just one paint color. So. White it was. Clean. Modern. And the perfect way for the walls to step back and let the wood and ironwork really shine. Granted, we went with a blue/gray in the full bath, but for the sake of argument, that’s technically wall-covering, not paint.

We decided to go dark on the wood floors and vaulted ceiling beams. The beams (which had already been shipped from the South), were slated to receive a light stain. But, being cedar, there were a lot of yellowy/orange tones that felt all wrong with the direction the design had taken. So we opted for a chocolate brown stain, turning the cedar into the beam equivalent of the most popular kid at school. For contrast, we went with a lighter/natural white oak on some of the accents.

We designed and installed custom cabinetry throughout, selected light fixtures and completed the bathrooms and kitchenette. We kept the furnishings classic and neutral, then layered in a few ethnic-inspired elements as a nod to the wife’s heritage. (Hellloooo, Trinidad! Welcome.) We brought in a mud cloth pattern on the ottomans and throw pillows, hung some calligraphy brushes and added a few other antiques and artifacts. (Hey Suburban Chicago Coach House, lookin’ goooood in your island-y accessories.)

Several custom light fixtures and the railings were already in the fabrication stage, thanks to an ironworker Tent Shop discovered (a fellow Southerner as well). The ironwork guy came once (once!) to the job site to measure like a madman. He whipped that tape around like a dimension-capturing ninja  – for everything from custom light fixtures to the stair railing, mantle, fireplace screen and office countertops. Since the fabrication was all happening out of state, there would be no popping back in for a quick re-measure. His math had to be precise-a-mundo. Ironwork’s not like a wedding dress fitting where you keep pinning and stitching right up to the big “I do” day. It’s pieces of non-budging metal being cut and welded in place. Soooo, permanent-like. Hence the thorough and precise number-jotting.

The original bathroom specs were heavy on dark slate, but we decided to rethink that. It felt like one place where we could bring in more color without interrupting the unfussy simplicity of the rest of the house – so we reimagined it as a brighter space. We’ll often do wall covering in powder baths where there’s no shower, but rarely do we go that route when it’s a full bath since the steam/humidity factor can be problematic. Curling edges are fine for thin pieces of chocolate atop a chiffony dessert, or ye olde scrolls quill-penned by monks in an ancient monastery – but less-fine on your bathroom walls. 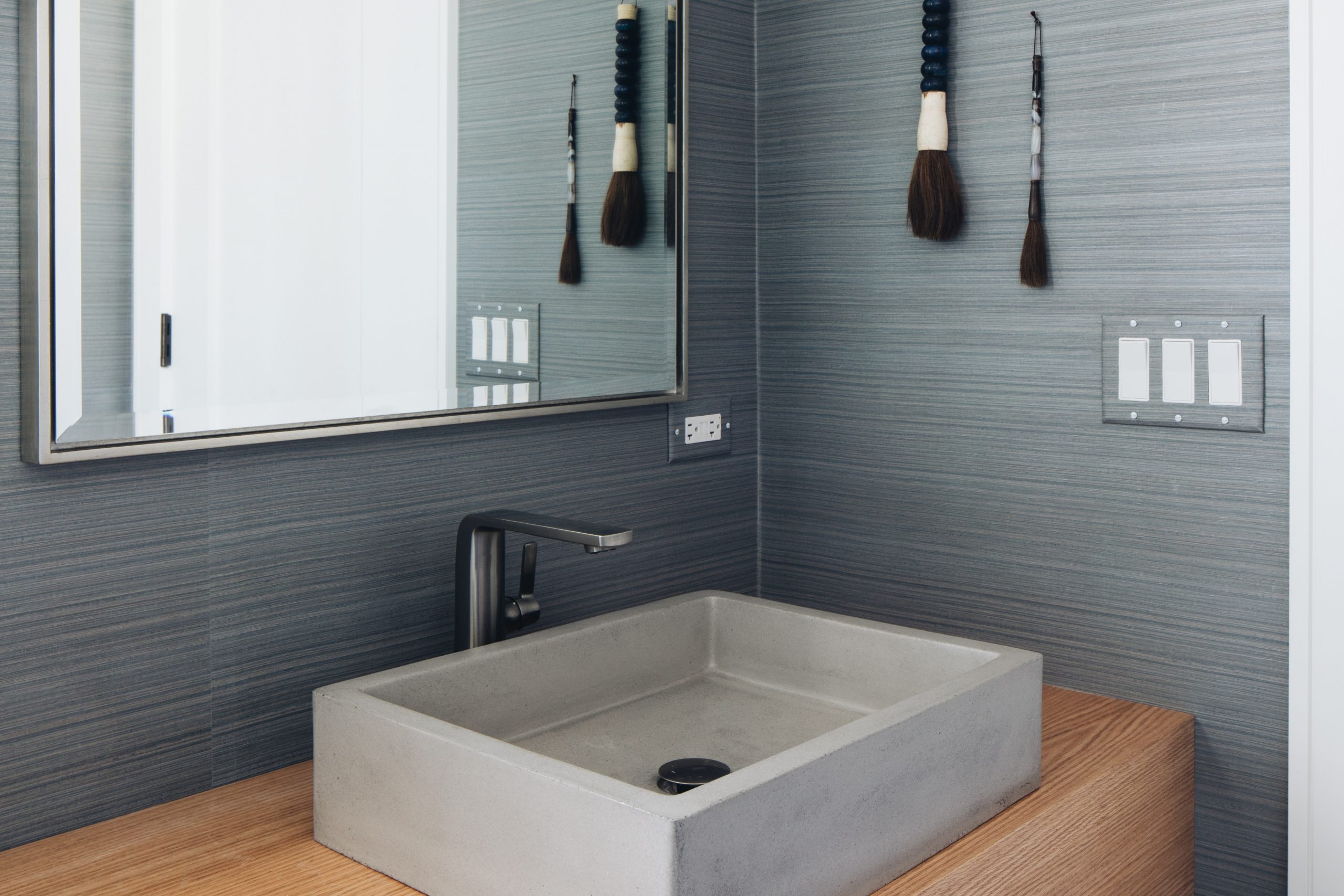 We found a blue grasscloth that looks convincingly silk-like, but is actually vinyl-based. (Pretty meets practical and they get along splendidly.) It went so well with the Ann Sacks blue-and-gray floor tile we were all gaga over, we couldn’t not do it. We kept the shower simple so the floor could be the star (jazz hands), but we did bring in some understated vertical metal bands to add some interest against the white tile so it didn’t go full wallflower on us.

For the recording studio and listening room, we kept the look in a similar vein to the rest of the coach house – white walls, dark floors – simple with a few Trinidadian touches. We added a glass and metal pivot door as an interior design element bridging the space between the studio and listening room, then wrapped the entry in white oak. Oak, oak, oak. All the way around. Ceiling and all.

We built understated recessed white oak niches, clear-coated with a thick bullnose detail to house the afore-mentioned awards and accolades bestowed upon the talented and exceptionally lovely recipient. She demurred from having them displayed anywhere front and center, so this seemed like the perfect spot. It’s a fairly private space, not meant to be a double-arm-sweep “Look at alllllll these achievements” Wall of Brag Swag in any way. Its intent is more motivational – to quietly push and inspire her to her next Big Thing. 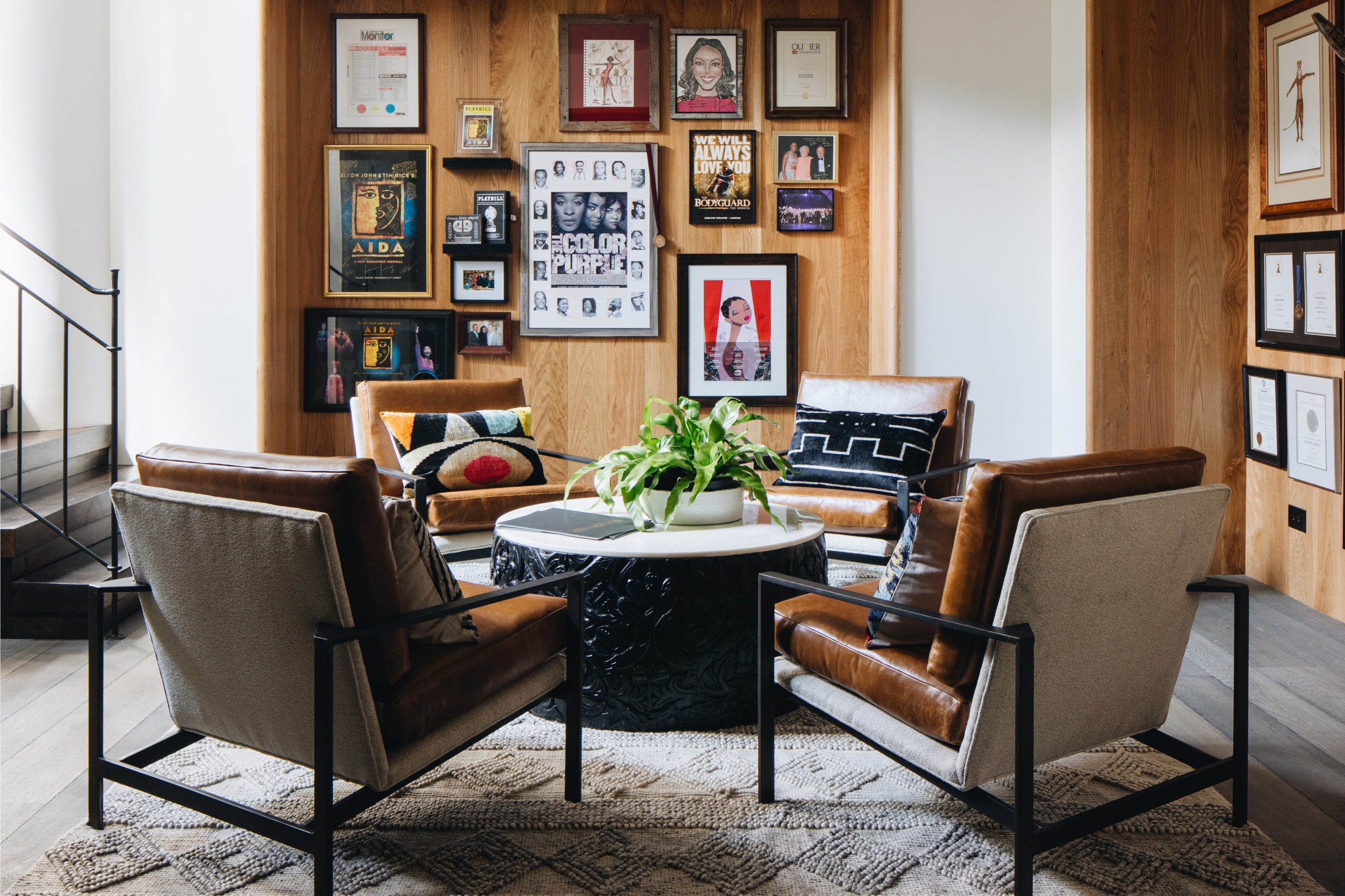 As we worked with her to select and organize the pieces for install, we realized what’s even more impressive than her accomplishments – is her humility. She’s a delight. Incredibly kind, funny, faithful and overflowing with gratitude for all that she has, including her husband. She’d repeatedly say, “I just love that man.” She’s the kind of person you really WANT to celebrate, and we wanted the walls to reflect all that joy. Admittedly, it was nerve-racking to hold the Tony. We were silently motioning to each other, pointing and mouthing, “A TONY!” Felt like holding a newborn, where you’re not sure if your arms will know what to do.

If you’re intrigued by the all-white walls and dark beams and open plan-ness – or if you’re simply inspired by the idea of a Tony and think your rendition of “Circle of Life” is a decent-to-strong contender – we’d love to hear from you. And talk house plans. Or recording studio plans. Or even kitchen or basement remodel plans. Whatever’s on your mind. We hope you’ll get in touch. 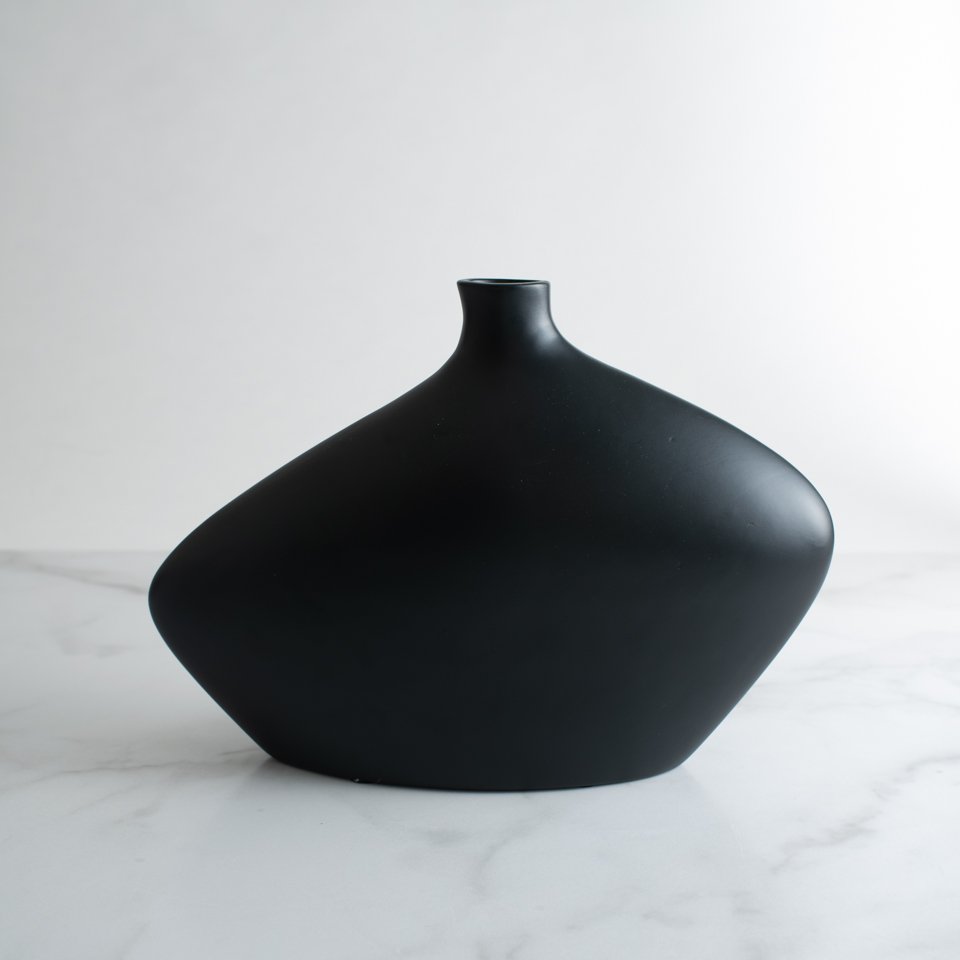 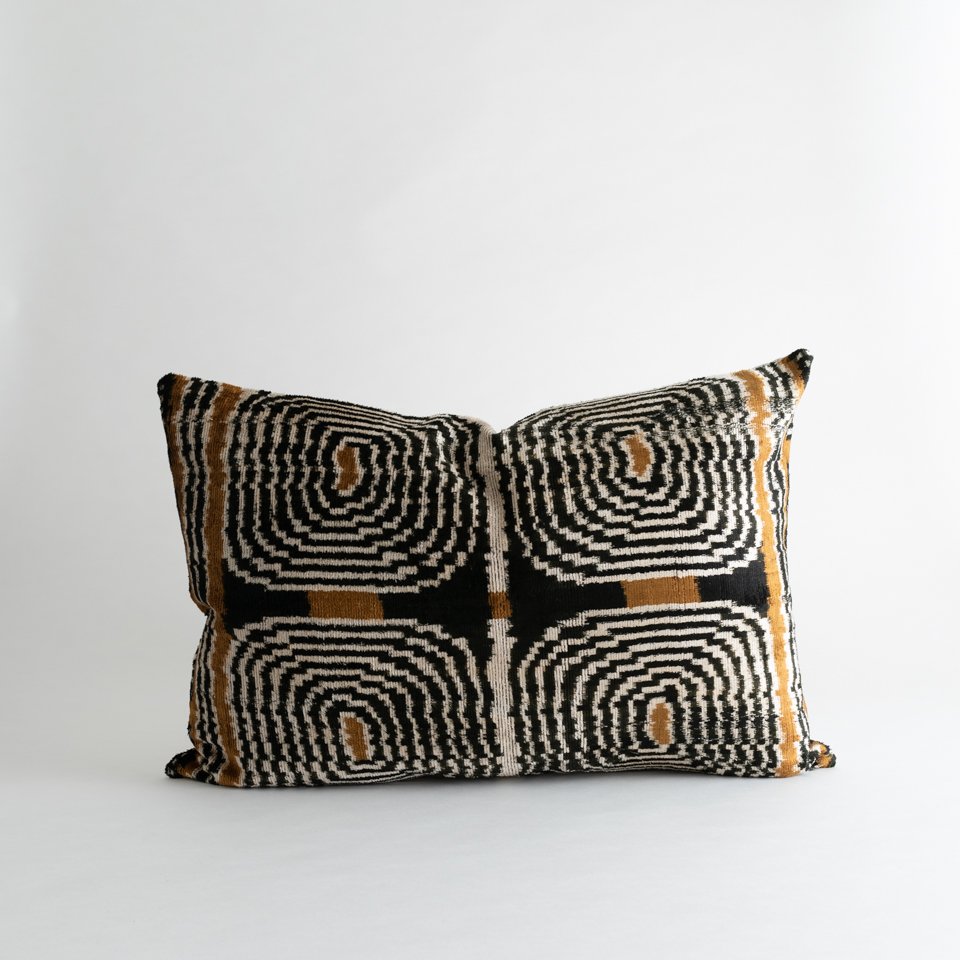 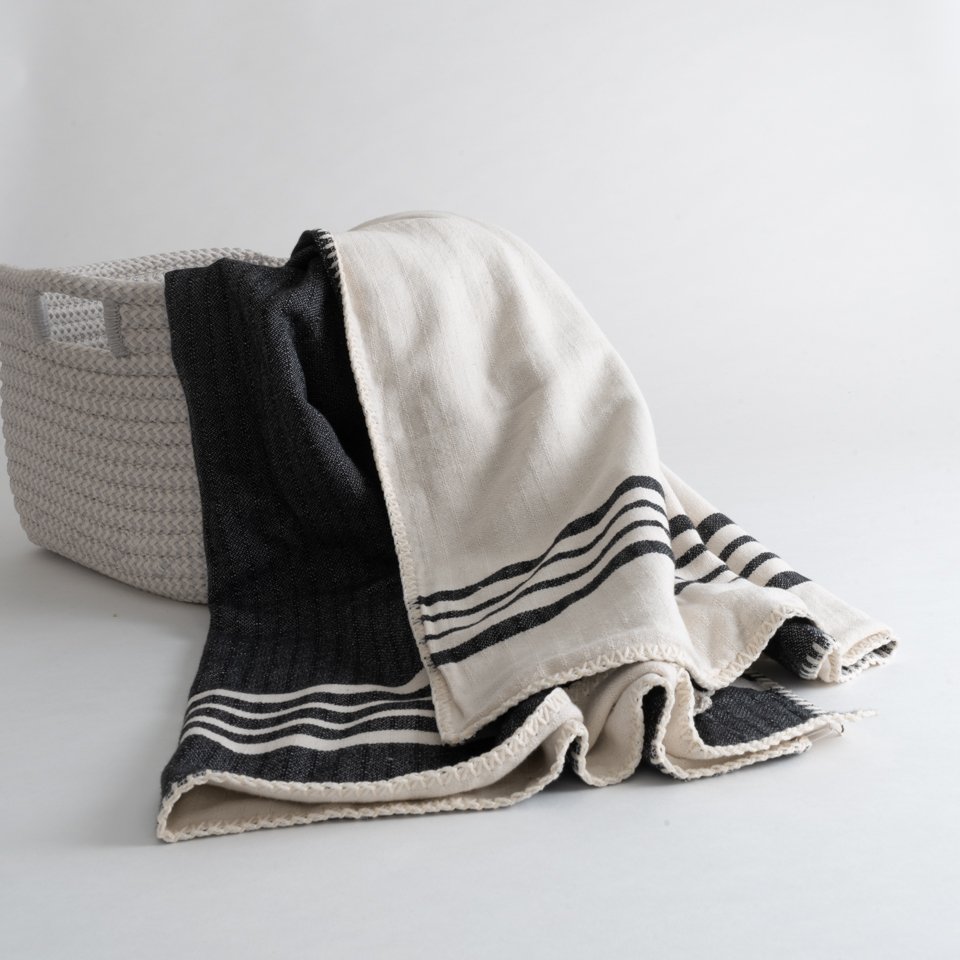 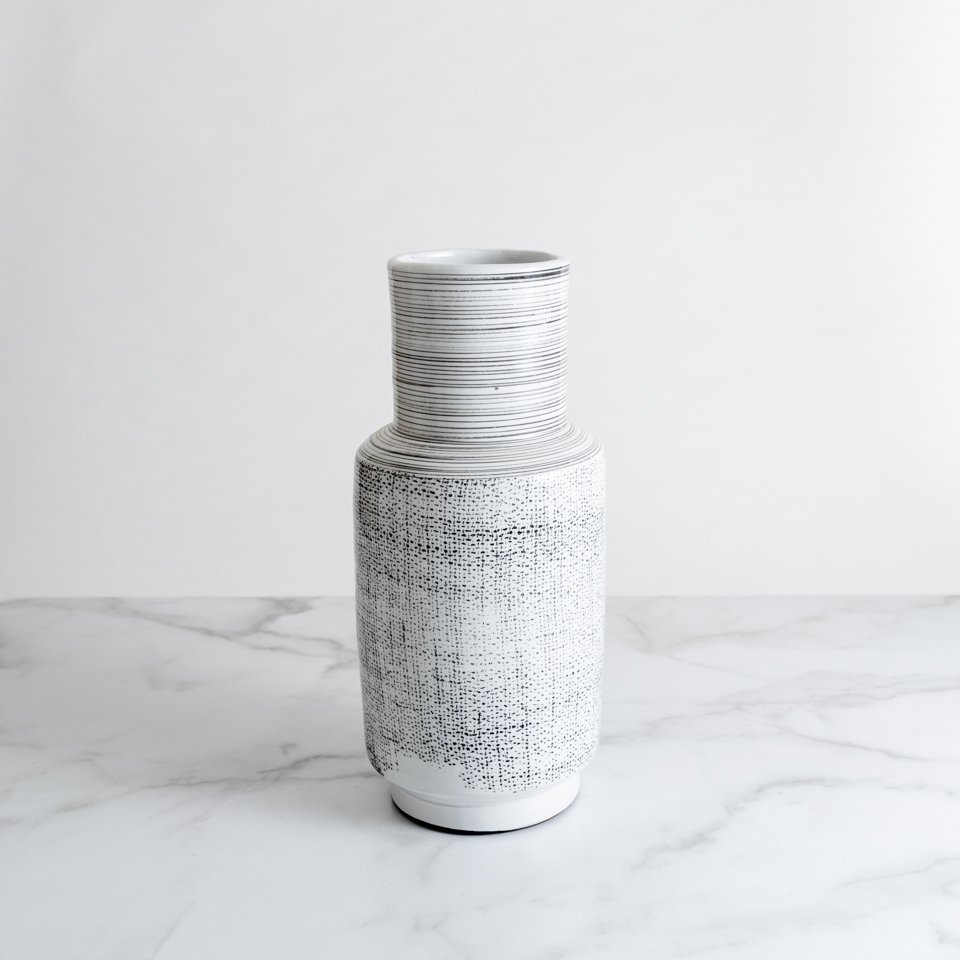 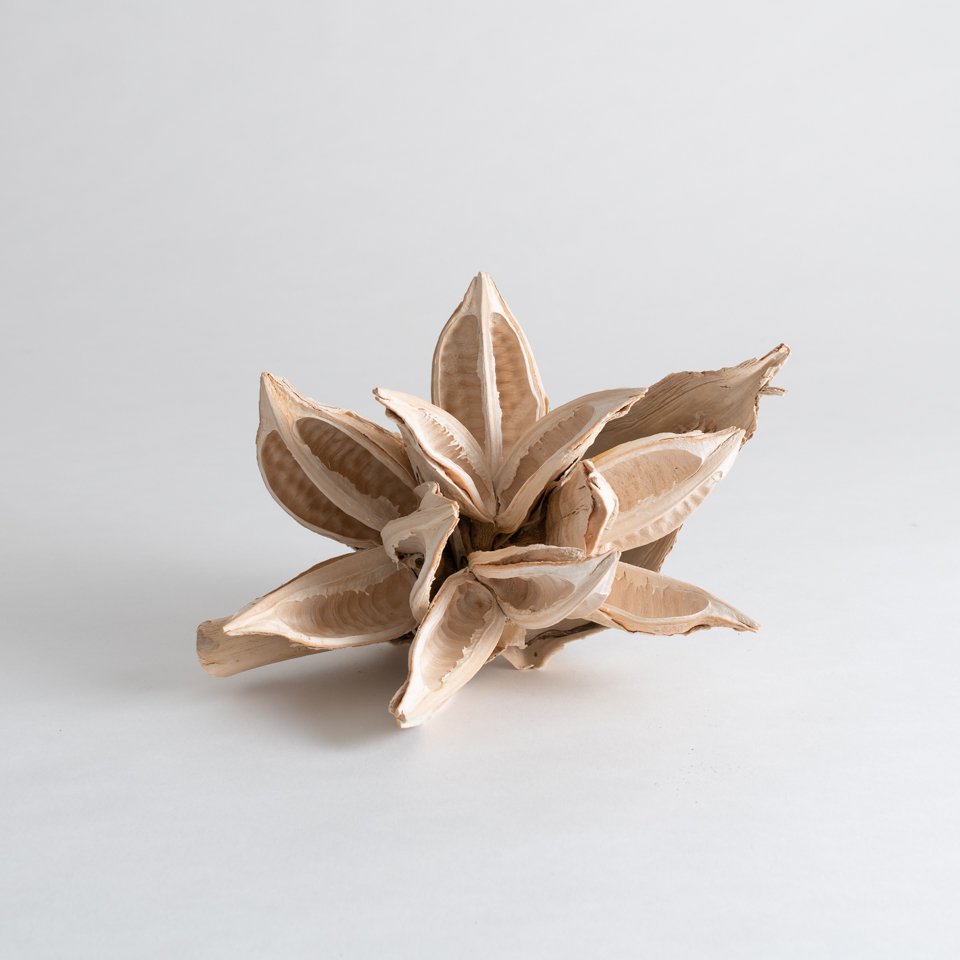 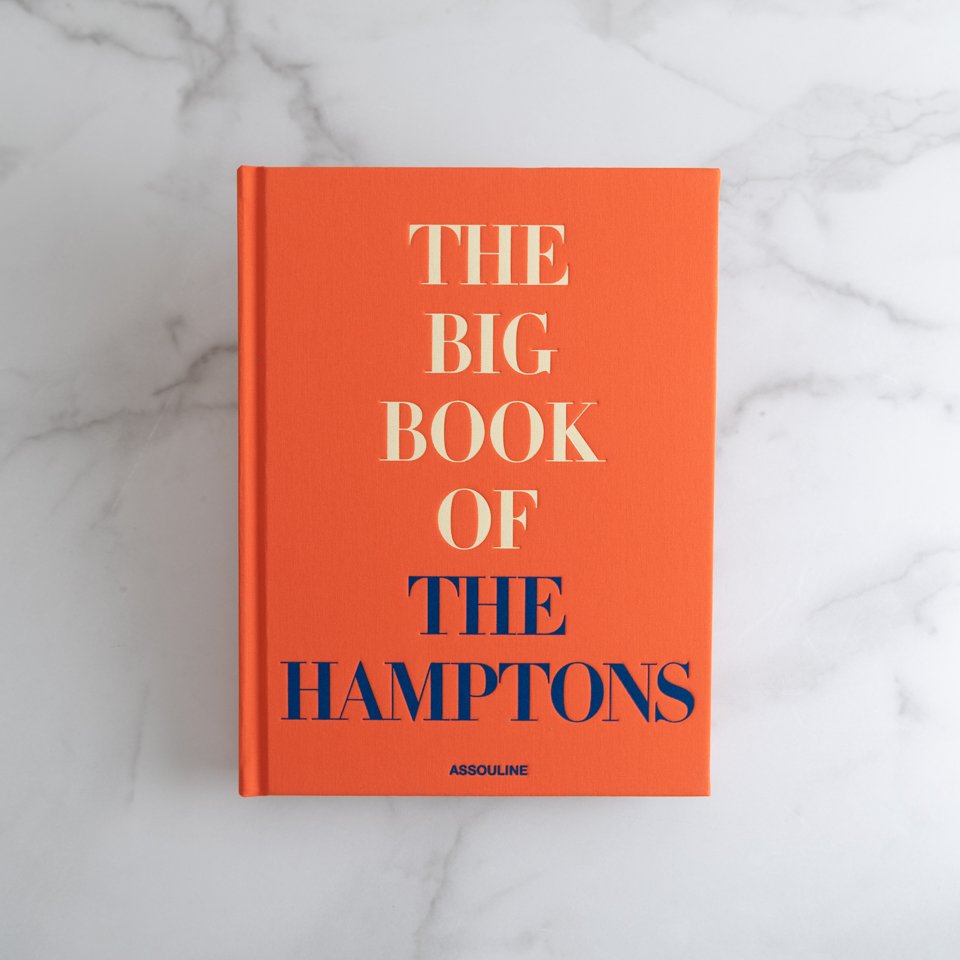 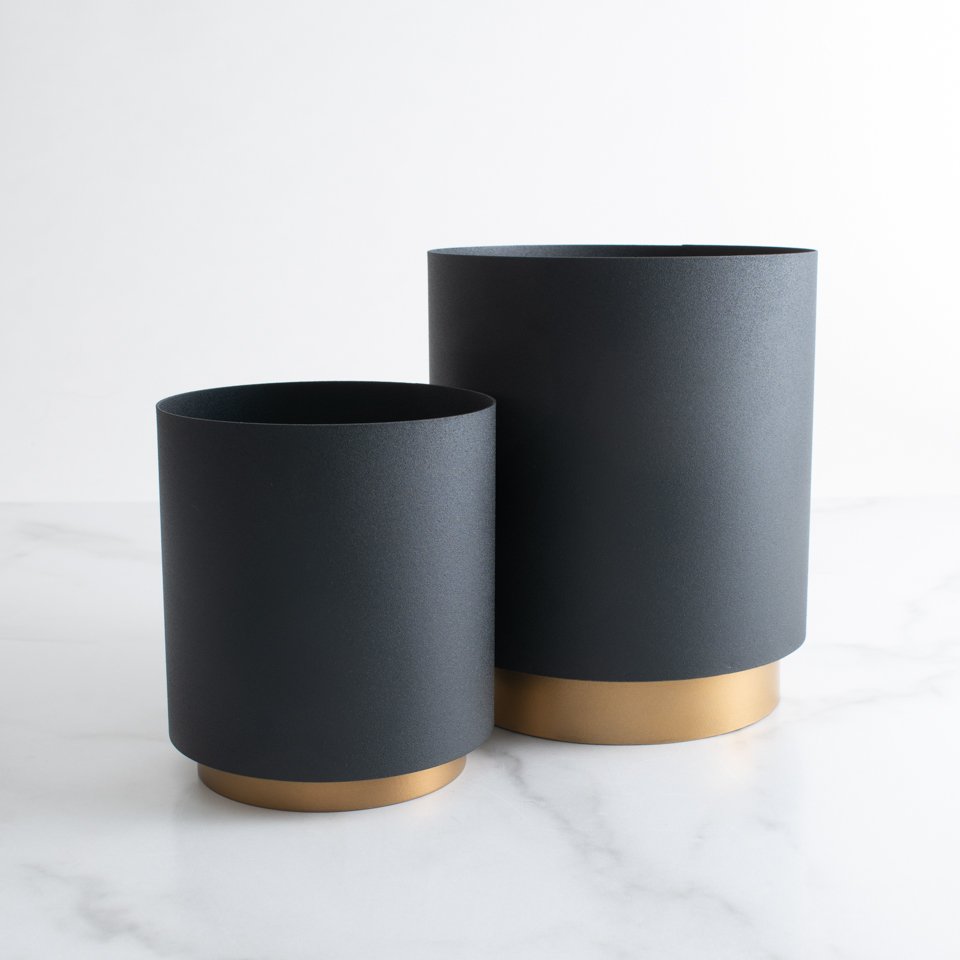 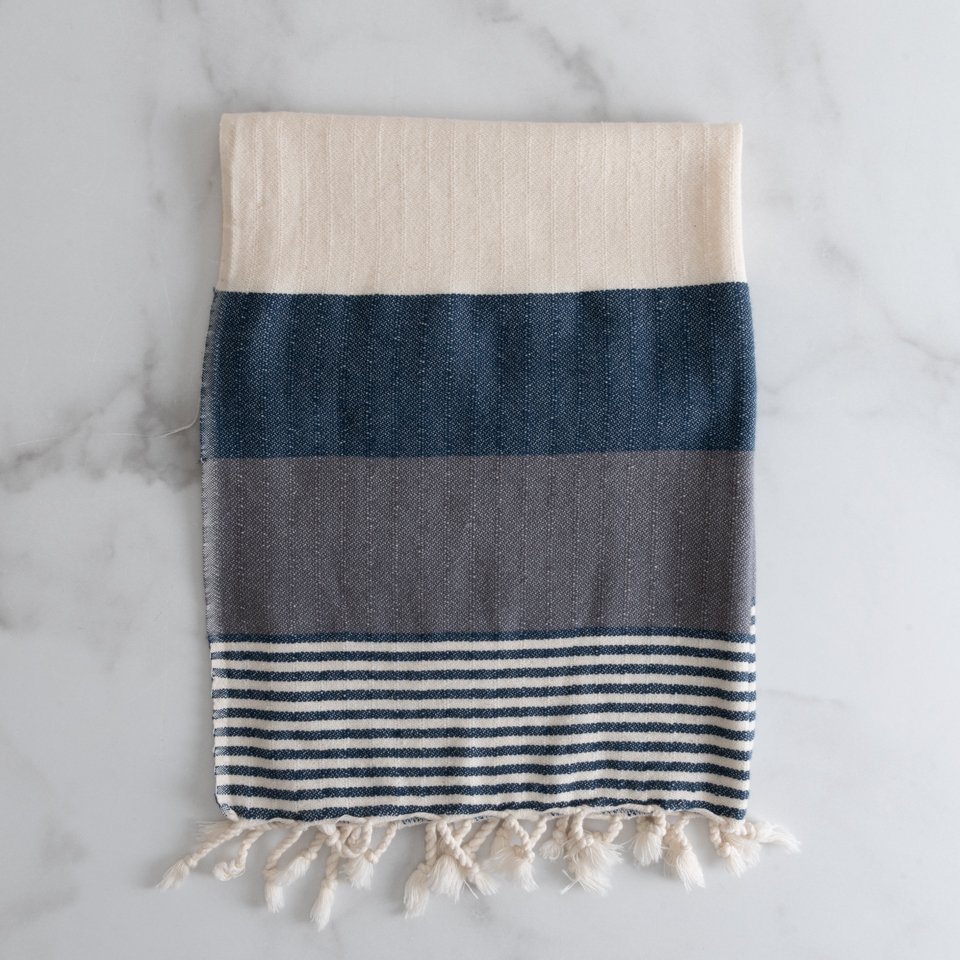